Something I would have liked for lunch, first excerpt from Oysters: Recipes that Bring Home a Taste of the Sea (Sasquatch Books. 2016) by Cynthia Nims.

Every escabeche I’d encountered before seemed to have a lot going on: slivered vegetables, chiles, various seasonings in addition to the vinegar-heavy base. But while in Galicia in northwest Spain, I tasted the local mussels en escabeche and the dish was blessedly simple and outrageously delicious: olive oil, a touch of vinegar, paprika. It inspired this approach with oysters, which makes a wonderful appetizer or cocktail snack.

This is a recipe for which the spice’s freshness is paramount, particularly a spice like paprika that is relatively mellow to begin with. This may be the perfect time to invest in some fresh paprika; I buy bulk spices in smaller portions that I’m likely to go through pretty quickly. In place of regular sweet paprika (which means “not spicy” in this case, as for “sweet” bell peppers), you can also use Spanish smoked paprika.

For marinating the oysters, choose a small, squat dish in which the oysters will be fully covered by the marinade, ideally one with a tight-fitting lid so you can just shake gently now and then to ensure even marinating.

24 small oysters in their shells, shells well rinsed, or jarred yearling to extra-small oysters, with their liquor

Crackers or sliced baguette, for serving 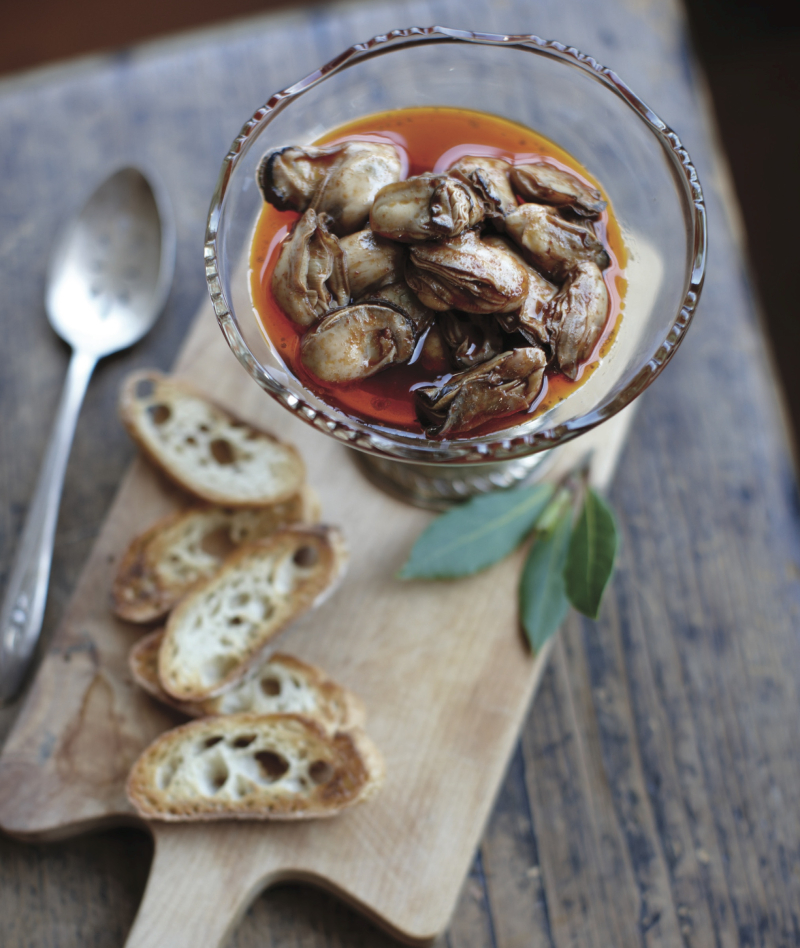 Bay is rarely among the fresh herbs tucked into our window boxes or backyard gardens. But when I needed some fresh bay to test a recipe about twenty years ago, I bought a little four-inch pot of the herb, used what I needed for the recipe, and transplanted it to my patio garden. I still have that same bay—now a small tree—and can’t tell you the last time I used a dried bay leaf. Dried bay has its place in stocks and stews, but fresh bay has a whole different character, with more vivid flavor that is almost reminiscent of nutmeg. Use it as you would dry bay, though it is versatile enough to even use in desserts.

(* Reproduced with permission from Oysters: Recipes that Bring Home a Taste of the Sea -Sasquatch Books. 2016- by Cynthia Nims, Photography by Jim Henkens)