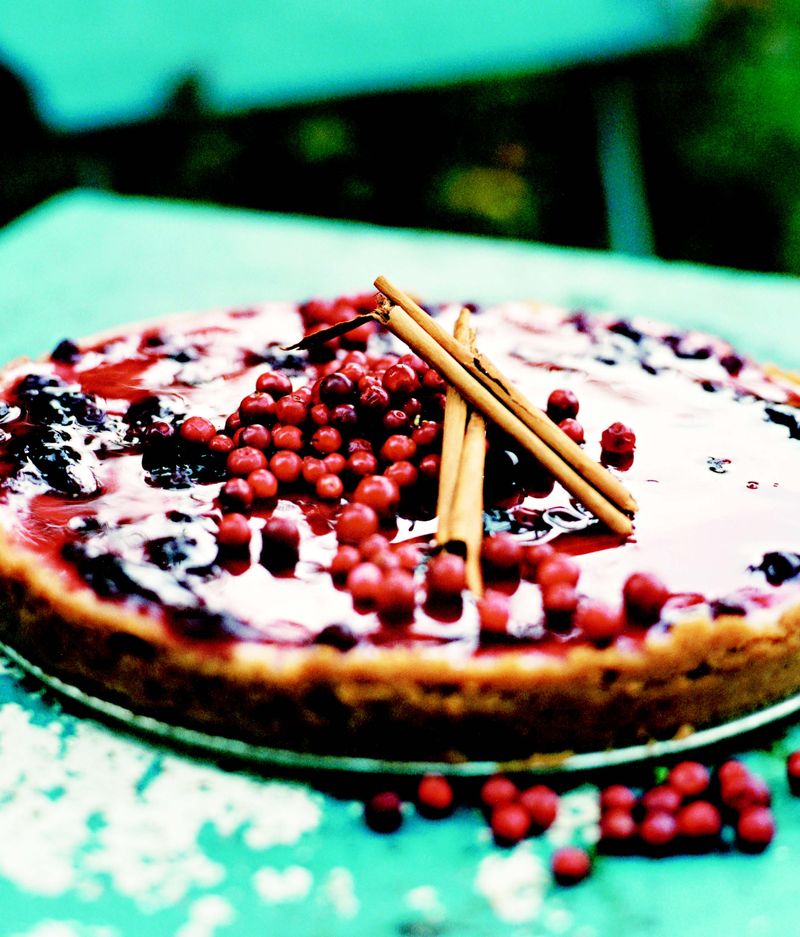 A few seats are still available

TIckets are £50 a head. Book Here, Bring Your Own Champagne BYOC

If you are nowhere near London, get a taste of Sweden with Lingonberry Cheesecake Recipe (pictured above) from Traditional Swedish Cooking (Skyhorse Publishing, October 22, 2011) by Caroline Hofberg.

80's Dessert Delicious Straight from the Pan, Tarte Fine Au Chocolat from 'The Book of Chocolate'

80's for dessert with 'Tarte Fine au Chocolat from The Book of Chocolate (Flammarion, 2004)...

This chocolate pie with an ultra-thin crust is a French specialty that first became popular during the 1980s. The crust is a classic pâte brisée, and the thinner it is the better. The recipe calls for removing the lightly cooked crust from the pan before filling, but this is a very delicate operation and the pie will be just as delicious served from the pan.

For the pâte brisée:

For the chocolate filling: 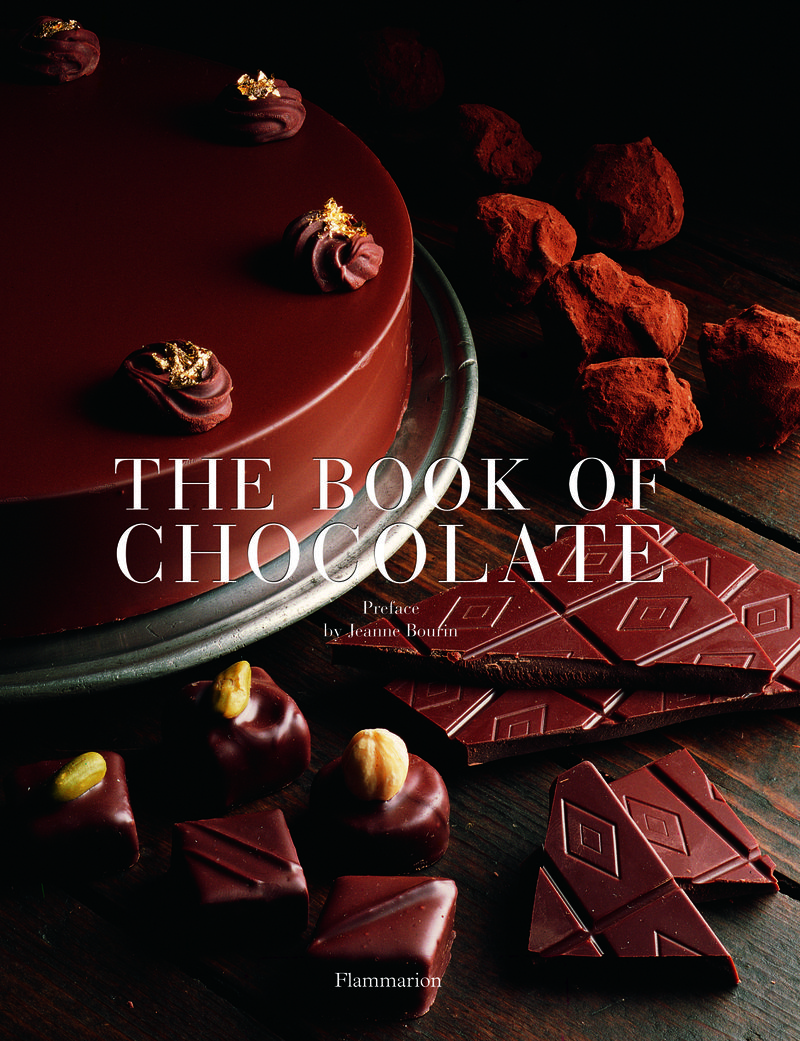 To make the pâte brisée:

Sift the flour and the salt into a mixing bowl, making a well in the center. Place the cold water, the egg yolks, and the butter in small pieces, into the well and knead gently until the dough becomes workable. Turn the dough out onto a work surface and, using the palm of the hand, push the dough away from you to blend the ingredients thoroughly. Gather the dough into a ball, wrap in a damp cloth or plastic wrap, and refrigerate for at least an hour.

Unwrap the chilled dough and roll it out to a thickness of ⅛ inch (3mm) on a floured work surface. Place the dough into a buttered pie or tart pan and pat it well into place. Prick the bottom with a fork. Line the pan with foil or wax paper, fill with dry beans to weight it down, and bake until the crust starts to color, about 10 minutes. Remove the lining and the beans and bake for about 5 minutes more, or until the crust turns a light golden brown; the crust should be lightly cooked. Remove from the oven and let cool. Carefully remove the crust, which will be very fragile, from the pan and place it on a rack.

Break the chocolate into small pieces and place in a large, heat-resistant mixing bowl.

Pour the still-warm filling into the lightly cooked pie crust and cool completely before serving.

Any chocolate lover will want The Book of Chocolate on their coffee table...and it retails around $18...

(* Reproduced with permission from  The Book of Chocolate' Flammarion, 2004...Revised and updated edition - October 2015...Originally published in France as 'Le Livre du Chocolat' in 1995) 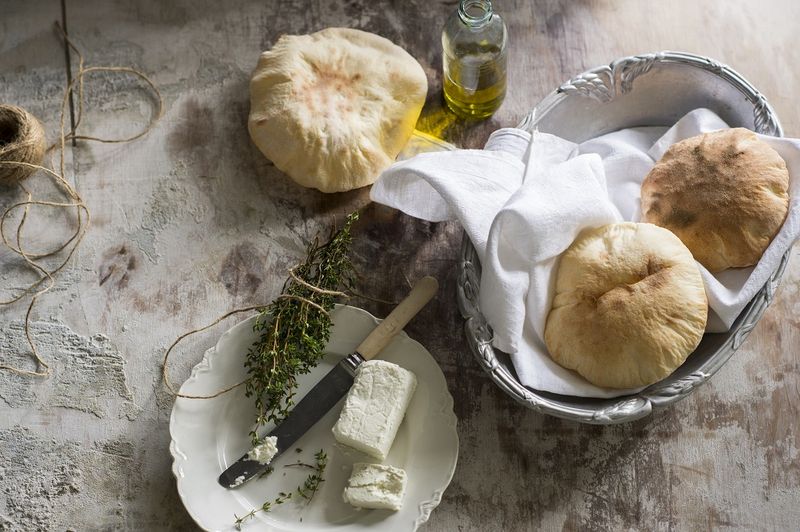 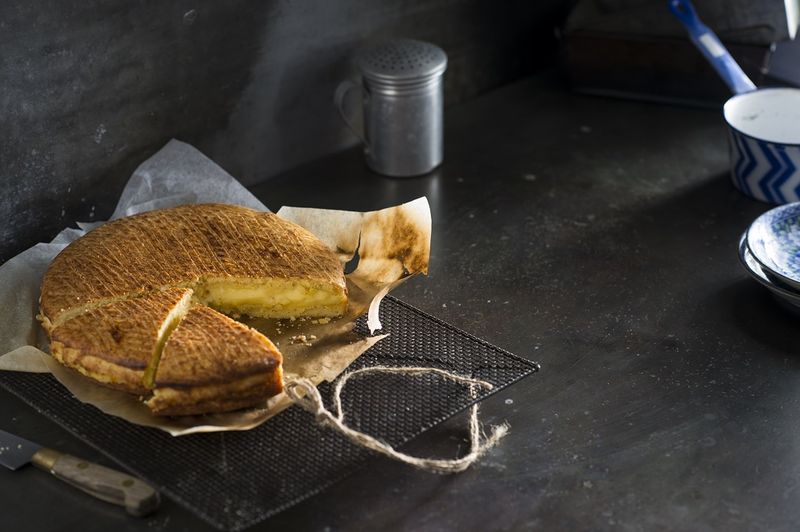 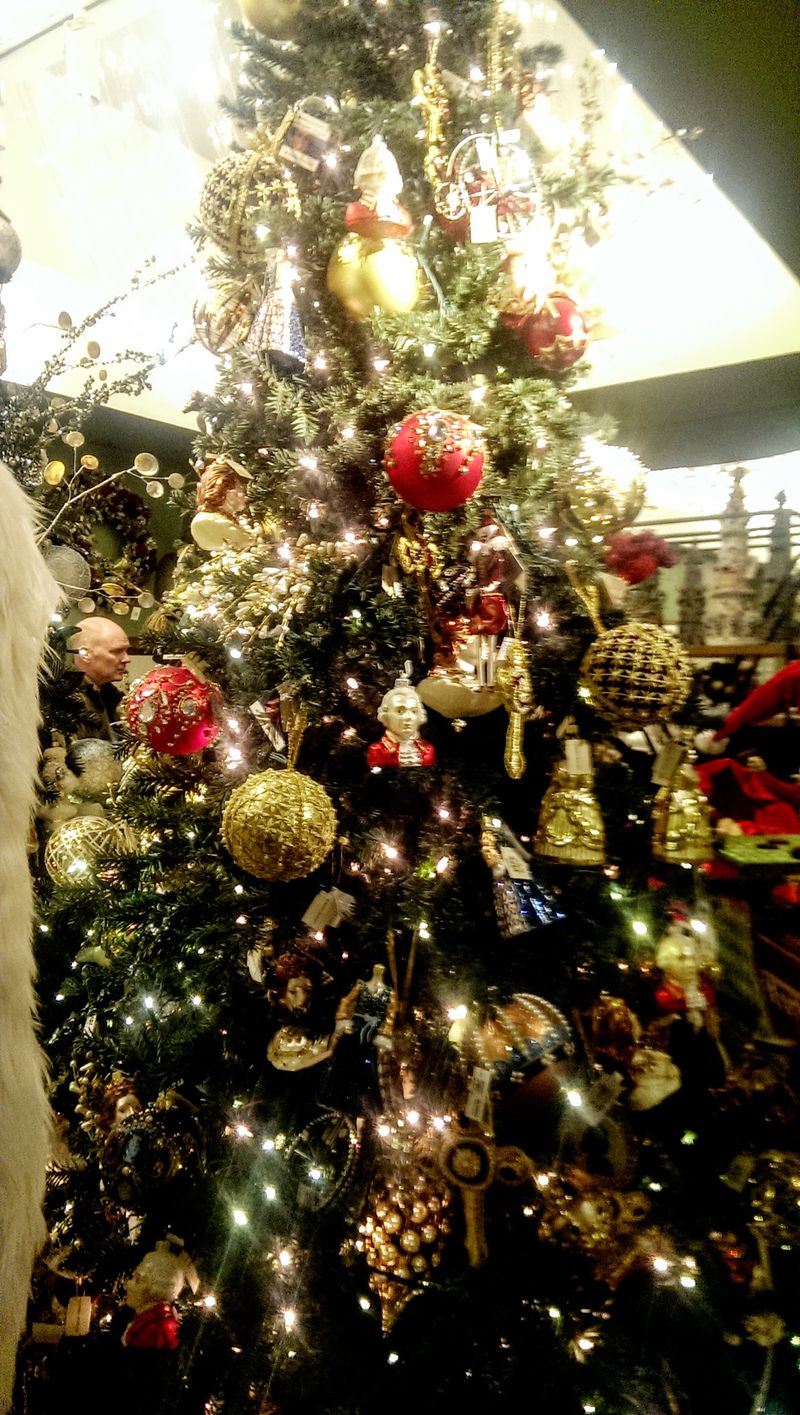 Did not buy huge chocolate tablet that was selling for around $250...

Would send anyone into sugar overdrive

Blinded by the Lights In Front of Bulgari 5th Ave Store, New York in December, A Bit Blurred

Blinded by the lights in front of Bulgari store 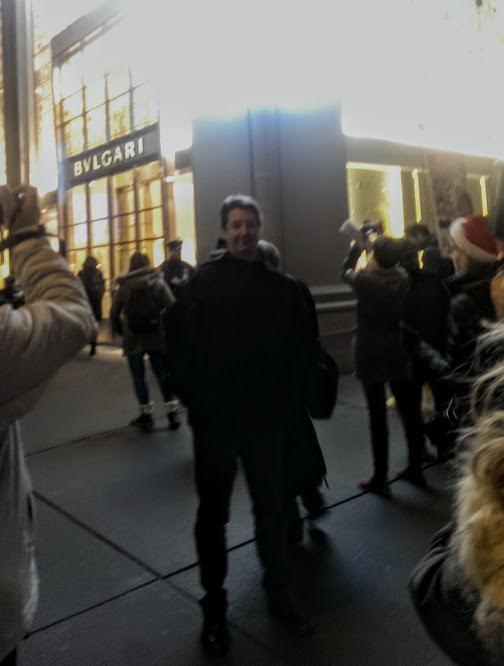 Pretend you are spending Christmas on Amalfi coast with with Positanese Pizza from Artisan Pizza, To Make Perfectly at Home (Kyle Books, November 2015) by Giuseppe Mascoli and Bridget Hugo.

This raw salsa is a classic from Positano on the Amalfi coast. You need very good tomatoes for this, so make sure that you

find some that are super-sweet and fruity. We also call this pizza “a la Eduardo,” a reference to Eduardo di Filippo, the

famous Italian actor, playwright, author, and poet, who passed this recipe on to us many years ago.

left to rise for

For the salsa (makes enough for 4 pizzas)

a pinch of dried oregano

a pinch of marjoram

a few sprigs of fresh 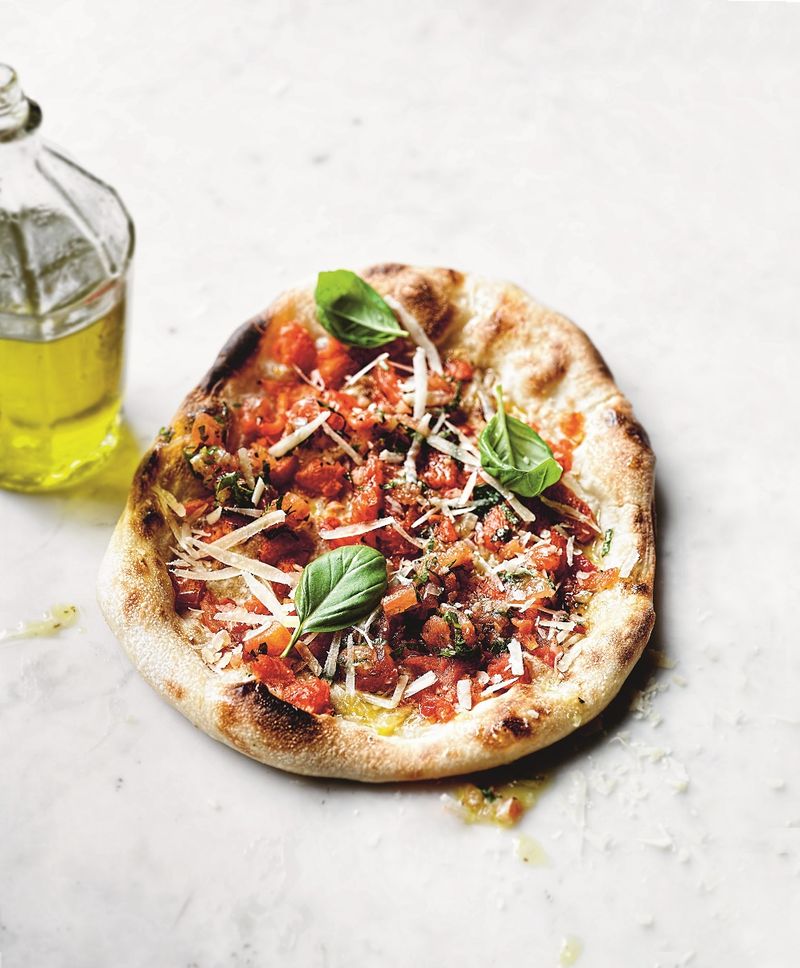 Make the salsa: Bring a pot of water to a boil and remove from the stove. Place the tomatoes in the water and leave for about 3 minutes until their skins start to wrinkle. Peel and seed the tomatoes and finely chop.

Place the tomatoes in a sieve, add the salt, and leave to drain over a bowl for about 20 minutes. Discard the juice and transfer the drained tomatoes to a large bowl with the garlic.

Add all the remaining salsa ingredients and stir to combine.

Marinate for at least 2 hours (it will keep in the fridge for up to 2 days, although if you do this, bring it up to room temperature before use).

Place a rack on the highest shelf of the oven and turn the broiler to its highest setting. When hot, place a greased 10-inch cast-iron pan on the stove, set to medium heat.

Divide the salsa into two bowls and set one aside, reserving it for later (in total, ensure you have enough for about 4 tablespoons per pizza).

Sprinkle a little flour over your hands and on the work surface and open the dough ball by flattening and stretching the dough with your fingers, or by rolling the dough with a rolling pin. Pick the pizza base up and gently stretch it a little more over your fists without tearing it. Drop this onto the hot pan, and allow it to start rising. As soon as the dough firms up, spread a quarter of the tomato salsa over the base with the back of a metal spoon.

Cook the pizza on top of the stove for about 3 minutes, then transfer the pan to the broiler for another 3 to 4 minutes. Once ready, add 2 tablespoons of the reserved salsa (at room temperature) and finish with Parmesan, either grated or shaved, with extra basil if you like. Serve whole or in slices.

It’s well known that the sign of a great dish is its ability to silence a large group of noisy people, enraptured by what they’re eating. All you hear is slurping and crunching, silverware against plates, chopsticks clicking. When the dish in question is la zi ji, the predominant sound is a soft rustling, like dry leaves skittering across a sidewalk. It is the noise made by diners sifting through a monstrous pile of chiles in search of golden brown bits of chicken hidden in the sea of red.

I’ve encountered versions of la zi ji, a dish most commonly traced to the Sichuan city of Chongqing, that are 95 percent chiles, 5 percent chicken. Some people balk at the idea of going to a restaurant and paying for a plate of food that is mostly inedible. To serve la zi ji at Mission Chinese, I needed to up the chicken-to-chile ratio.

Chicken wings to the rescue.

I’ve been pursuing the ideal chicken wing for most of my career. I’ve dabbled in all manner of elaborate wing practices. I’ve cured wings, confited them in chicken fat, smoked them, and sous-vided them. I’ve been close a few times, but I’d never really settled on a method until I spoke to a friend whose mom worked at the Anchor Bar in Buffalo. The Anchor Bar is the supposed home of the original Buffalo wing. I prodded my friend, trying to get her to ask her mom for their secrets. Eventually I pried out of them that the key to a perfect chicken wing is to treat it like a French fry: parcook it, freeze it, and fry it. The freezing causes the liquid in the skin to expand and burst the cell walls, resulting in perfectly thin, crisp skin without any breading. Once I learned this technique, I never looked back.

This is how a lot of things work at Mission Chinese. We talk to people with a history of doing things right, and we learn from them. Then we consider how we can add something to what they’ve taught us, improve on it, make it our own. In this case, the addition of fried tripe to a plate of chicken wingsis giving your guests 110 percent. I like mixing proteins and layering similar textures. Here, on the same plate, you get the crackly skin of chicken wings, still juicy on the inside, as well as the crunchy chew of fried tripe. Plus the papery toughness of those chiles, which, I should mention, you don’t eat. Please stop coming to the restaurant and eating the chiles.

Note: You need to parcook the wings a day ahead, so don’t start this recipe on Sunday morning thinking you’ll have wings in time for football.

½ cup vegetable or peanut oil, plus 8 to 10 cups for deepfrying 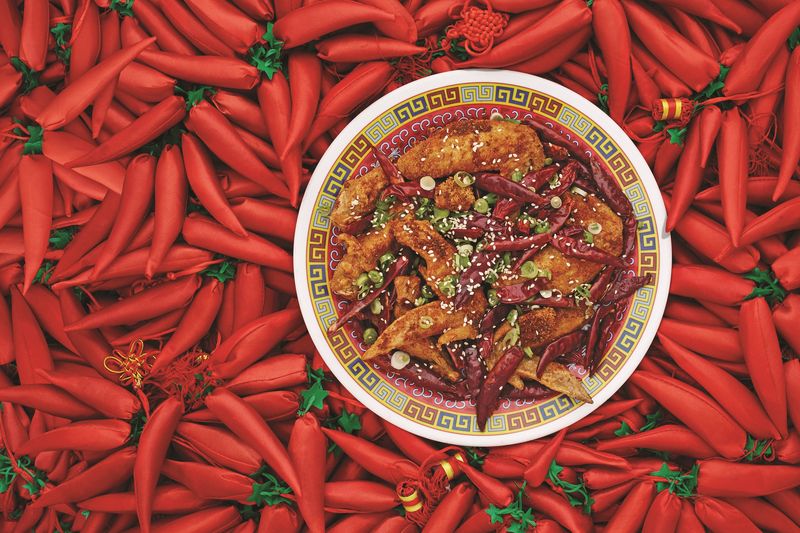 This is the gentleman’s MSG. It’s umami incarnate, in powdered form. It makes dishes more savory, but since it’s made primarily of powdered dried mushrooms, it lacks the stigma—unwarranted or not—of MSG. You can find mushroom powder at Asian markets or online, usually from Taiwanese producers. But a slightly less potent, and less mysterious, version is easily made at home. I wouldn’t recommend making this in a large batch, as the flavor dissipates over time.