Imagine a New York subway-MTA  map that would include a line running to Albany and it gives you a sense of where this train line stands.

The R3  line of Rodalies de Barcelona, the commuter rail and metro service for Barcelona metropolitan area, runs all the way from Latour de Carol (La Tor de Querol in Catalan) to Barcelona...(end of the line in top right corner of the map). 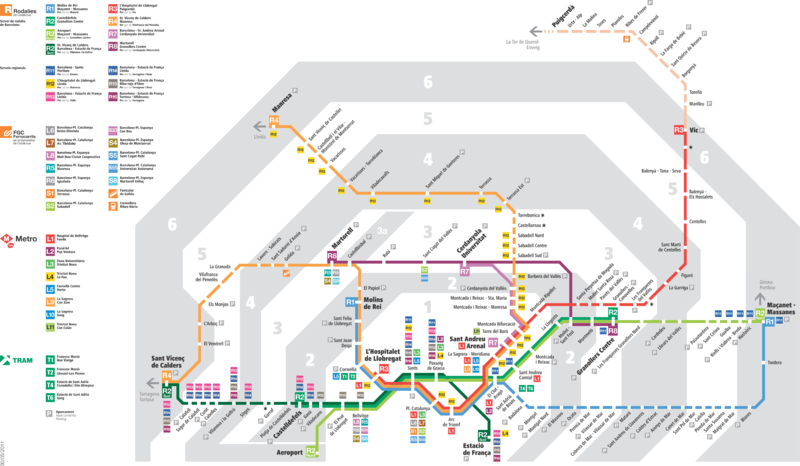 If you travel from Toulouse to Barcelona, it is a scenic if longer (yet cheaper, at most half price from faster route) alternative through the Pyrenees.

You can book first leg from Toulouse to Latour de Carol-Enveitg (3 hours trip) via SNCF ... Tickets for R3 part can only be purchased I believe in train stations...

I plan to try that route mid-July.

One of my main chagrins at wine tastings and events is the paucity of food.

It will not be the case at Raw Fair, the natural wine event in London created by Isabelle Legeron. 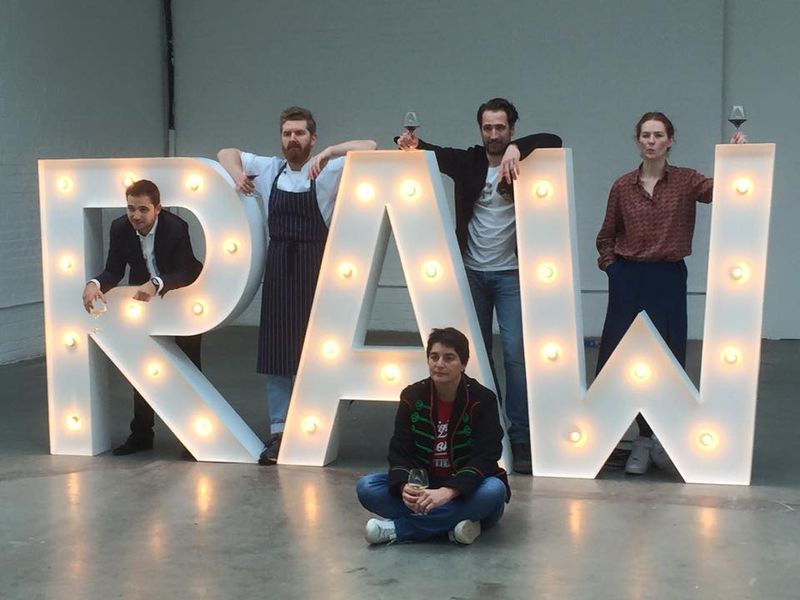 2015 edition (May 17) will have an appetizing line-up of food offerings:

"Three of London’s top natural wine venues will be onsite serving a delicious array of dishes. The latest addition to the booming Hackney dining scene, The Richmond, will be hosting a Raw Fish Bar, all freshly caught in Cornwall. Rawduck, known for producing their own in-house pickles and ferments will be serving up enticing salads and you can enjoy a selection of top charcuterie from Antidote, London’s original natural wine bar.

The capital is a hub for artisan food producers of the highest quality and they’ll be out in force at RAW. Sample the likes of Hansen-Lydersen salmon, sustainably sourced from the Faroe Islands and smoked in Stoke Newington, a range of cheeses from Bermonsey-based Kappacasein Dairy and Mons Cheesemongers and handmade croissants, brownies and other sweet treats from The Little Bread Pedlar, who deliver their wares to cafes across the city by bicycle. Other not-to-be-missed delicacies include Maldon Oysters and traditional handmade pasta from pastificio Burro e Salvia, based in Shoreditch & East Dulwich. Rude Health , purveyors of delicious, healthy cereals and snacks, will be on hand, providing each wine producer with their Mini Thins - the perfect palate cleanser."

Gordo, Not Gordito, Monastrell and Cabernet Sauvignon Blend from Yecla 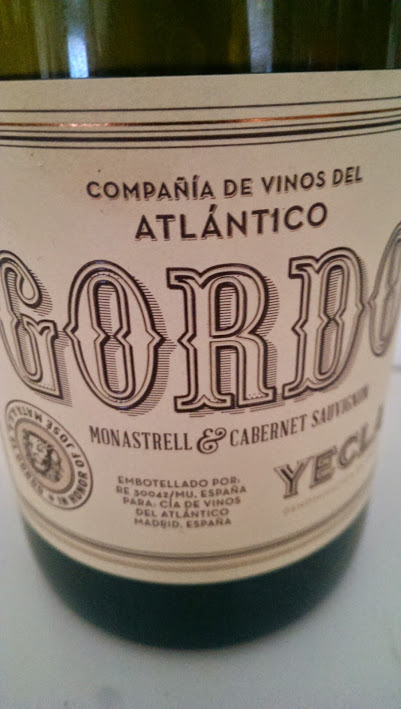 Monastrell and Cabernet Sauvignon Blend from Yecla, imported in US by Ole Imports...

Beer that Drinks like a Meal and Old Capital

Beer that drinks like a meal from Founders Brewing... 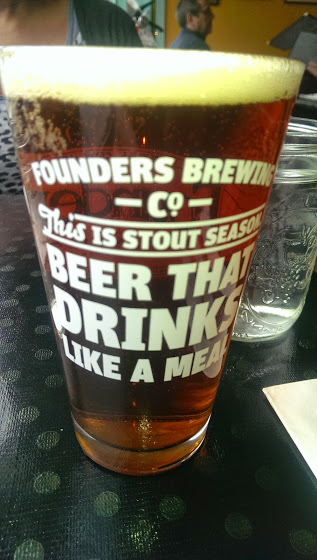 Or Old Capital by Keegan Ales... 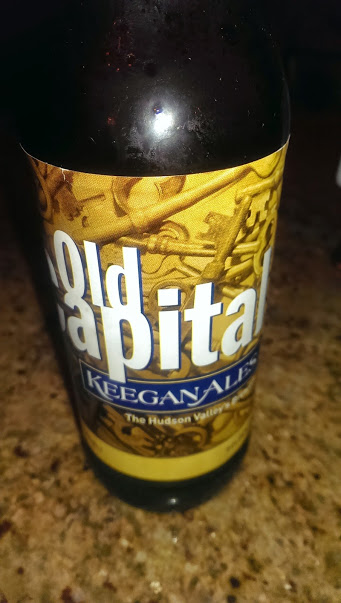 Just for the sake of sending it to Ms. Marmite Lover, I could not resist taking a picture of Vegemite (remember Men at Work 'Down Under') and Marmite shoulder to shoulder at Cost Plus World Market in Livingston. 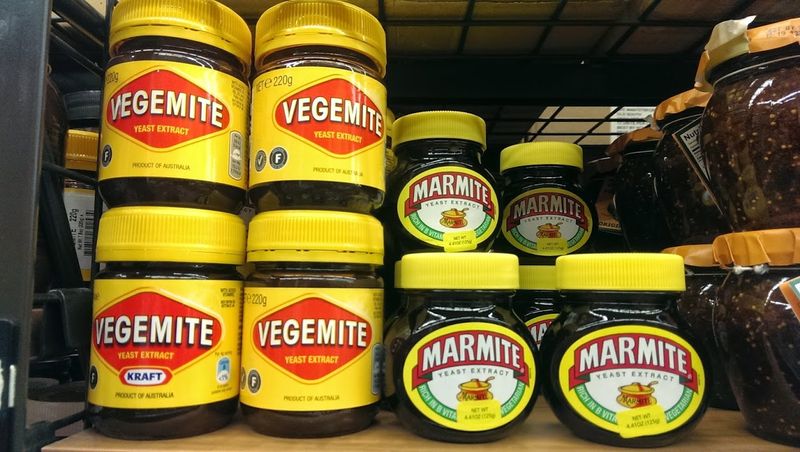 Even though this one and only location in New Jersey has been opened for about a year (according to staff member) I discovered the store while picking up an item for a client at Buy Buy Baby next door.

Store concept feels a bit like Anthropologie meets AC Moore (for DIY craft items) and Sur La Table for kitchenware and housewares with an international food section added on top.

Vesuvius in the Distance, a Photo, As opposed to Tate 'Distant View of Vesuvius', a Painting

Vesuvius in the distance, a photo 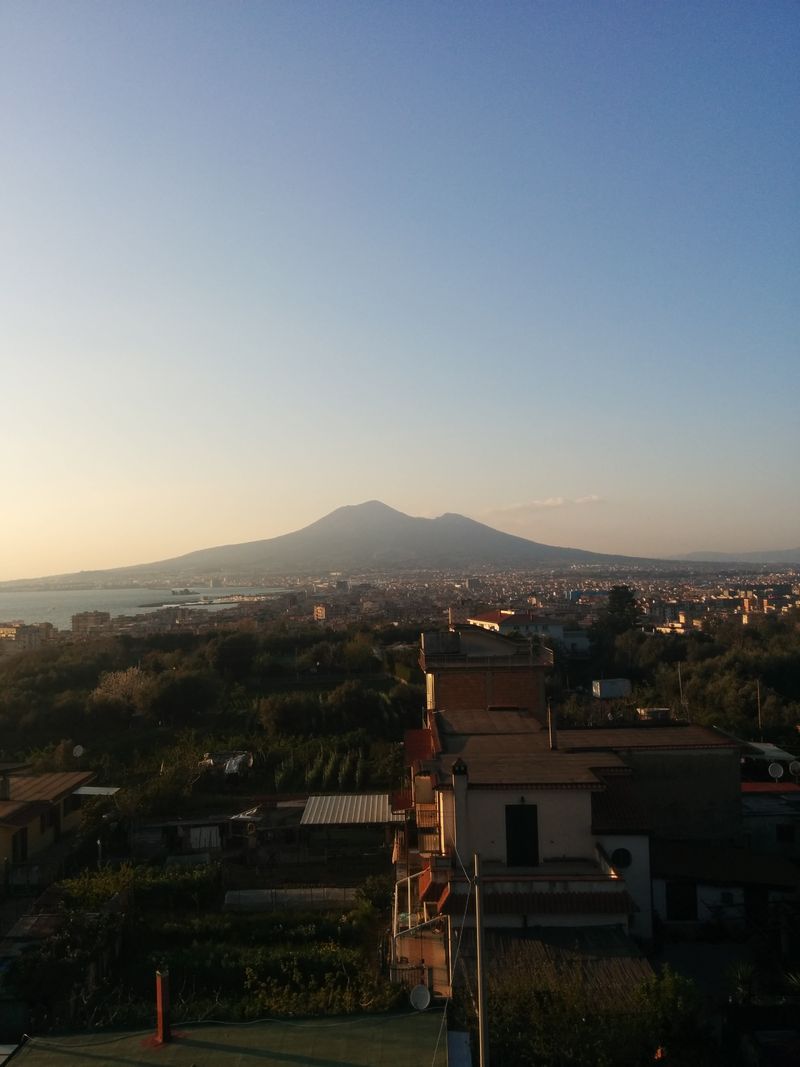 As opposed to Distant view of Vesuvius, a painting of an eruption 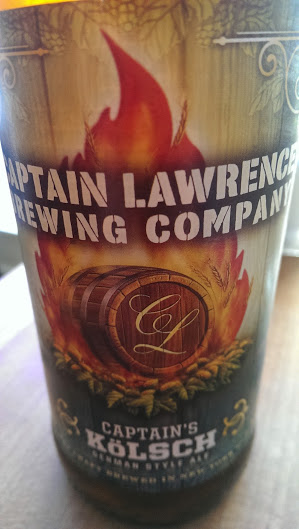 Tasted in Kingston , New York that is

After Pink Zelda and Green Devil, 3rd and last excerpt from  Cocktails on Tap, The Art of Mixing Spirits and Beer (Stewart, Tabori and Chang, March 2015) by Jacob Grier will add fireworks to your party. 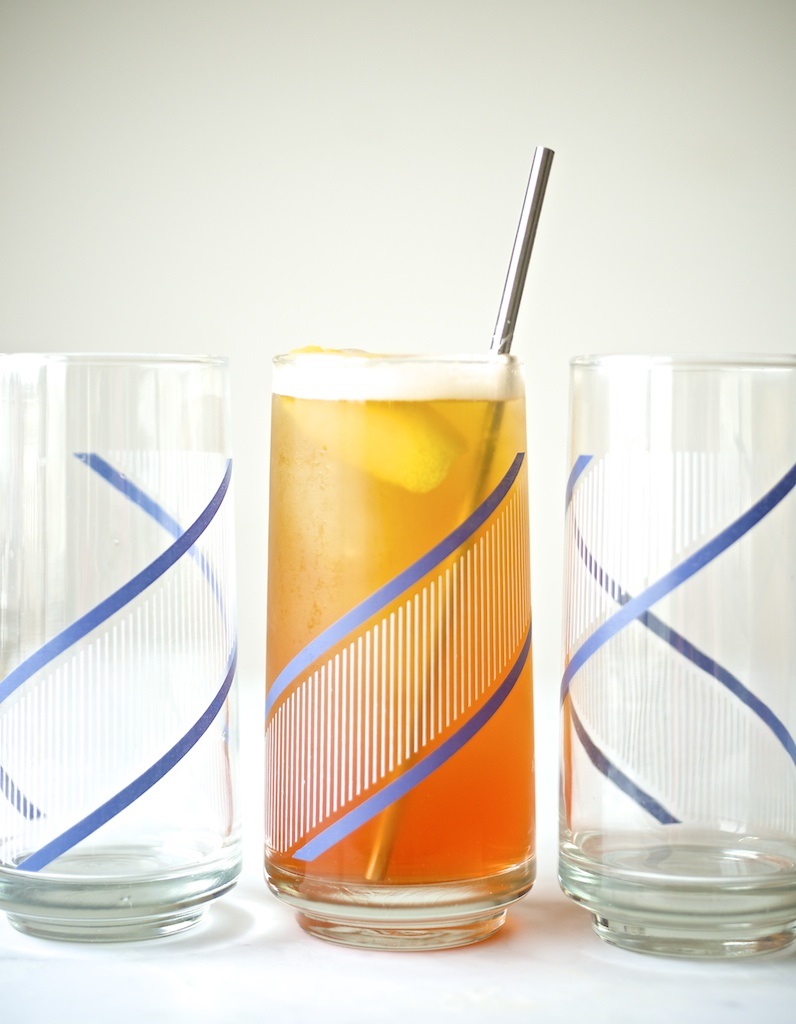 Combine the rye, Aperol, lemon juice, syrup, and bitters in a shaker and shake with ice. Strain the  drink into an ice-filled pint glass. Top it with the hefeweizen and garnish with the lemon peel.

Combine the sugar and water in a pot and heat, stirring, until the sugar has dissolved. Store the
syrup in a sealed bottle in the refrigerator. It will keep for several weeks.

The Cakewich: the sandwich that looks like a cake!

This is not a joke dish. It is something people actually eat in Sweden on special occasions, where it’s called a Smorgåstårta. It’s also a good idea for people who don’t eat sugar, as they can have a birthday cake that is savoury! Smorgåstårta makes a fantastic centrepiece and is spectacular for kids’ parties, too.

This savoury ‘rainbow’ cake would be a great ‘carrier’ for leftovers. I’ve done it with traditional Scandinavian ingredients such as smoked salmon, fish roe, fish roe paste from Kalles and pickled cucumbers. But do use up whatever is in your fridge.

For the Fillings (Depending on how many layers you have)

A handful of cress or dill, washed and dried 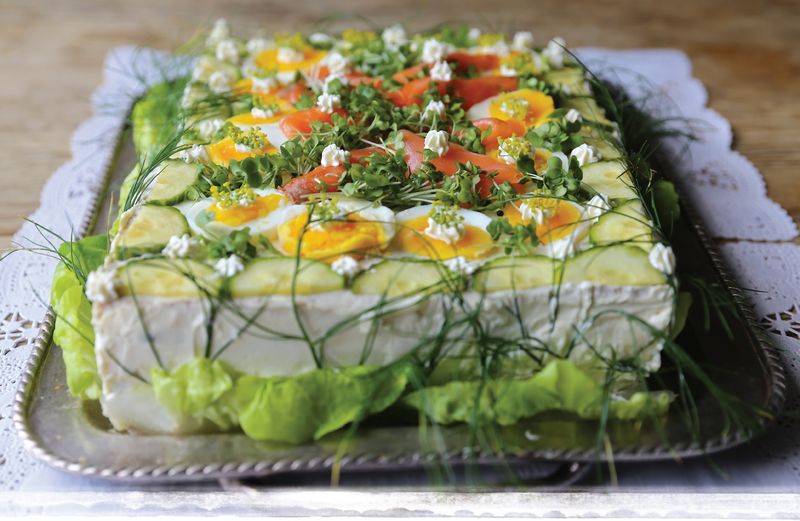 Assemble your cakewich on your final serving plate, whether it’s a board, large plate, tray or cake stand. You don’t want to have to move it later and risk breaking your concoction.

For the cakewich structure, whip the cream cheese in a food processor until it is light and fluffy. Reserve 100g for the crumb coat and 200g for the top coat (spread on the outside of the constructed cakewich, which helps to ‘glue’ the cakewich together). Spread the white and brown bread slices on both sides with the remaining whipped cream cheese (you do not need to spread the bottom of the bread that will make up your base layer).

Create your base layer with some slices of white bread (cream cheese side up), fitted together tightly. Top with one of the filling ingredients. Do the next layer with brown bread, positioning the slices so that they overlap the white slices underneath, but facing the opposite direction. Top with another of the filling ingredients. Continue to build up your cakewich, alternating between white and brown bread and using a different filling for each layer. Finish with a layer of bread slices on top.

Once the layers are completed, use a rubber spatula to thinly spread the reserved 100g whipped cream cheese around the sides and top of the cakewich to make a crumb coat. Wrap the cakewich and plate/board/stand in cling film, then chill in the fridge for an hour or so to firm up.

Once the cakewich is chilled, spread the remaining 200g whipped cream cheese in an even layer around the cakewich sides and over the top, to create a top coat all over. Garnish the cakewich using any leftover filling ingredients, plus the thinly sliced boiled eggs, the cress and dill. If you like, you could pipe cream cheese rosettes around the edges using a star-shaped piping nozzle. Serve immediately, cut into slices.

Use a rubber spatula to spread the cream cheese on the bread. Processed bread is soft and difficult to butter when untoasted.

It’s easier to make a square or rectangular sandwich cake because of the shape of the bread, but for a more birthday-cake look you could make it round with the aid of a cake tin as a template.

Try to use bread slices of similar dimensions; it makes it easier to assemble, otherwise you will have to do a jigsaw of pieces, although you won’t see this once the cakewich is assembled and covered.

You could use mayonnaise instead of cream cheese if you want a lighter cake.

Posted on April 06, 2015 in Books, Food and Drink, Personal Organizer, Recipes, Serge the Concierge, To Do Lists, Weblogs | Permalink | Comments (0)

Have a floppy ear rabbit chocolate holiday with this Maynard Rabbit from Oliver Kita in Rhinebeck (New York). 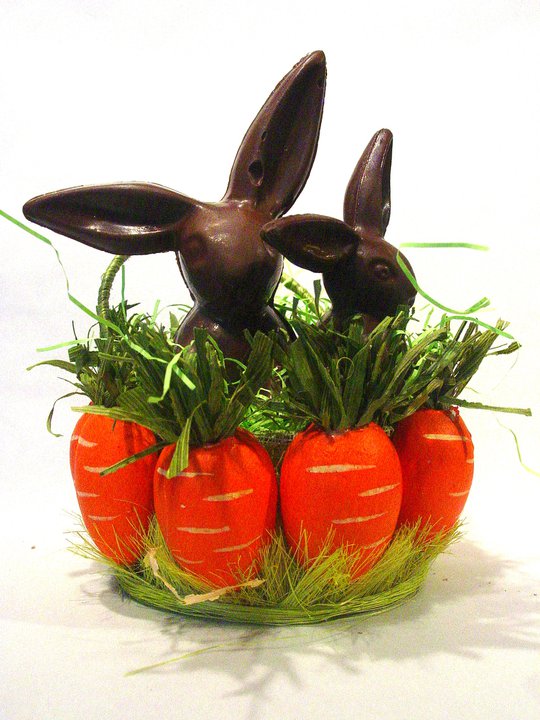