Spirit and History of Toulouse through its Doors and What's Behind Them, Photo Number 1

While walking the streets of Toulouse this past month (August 2012), I must have snapped a 100 photos of doors. 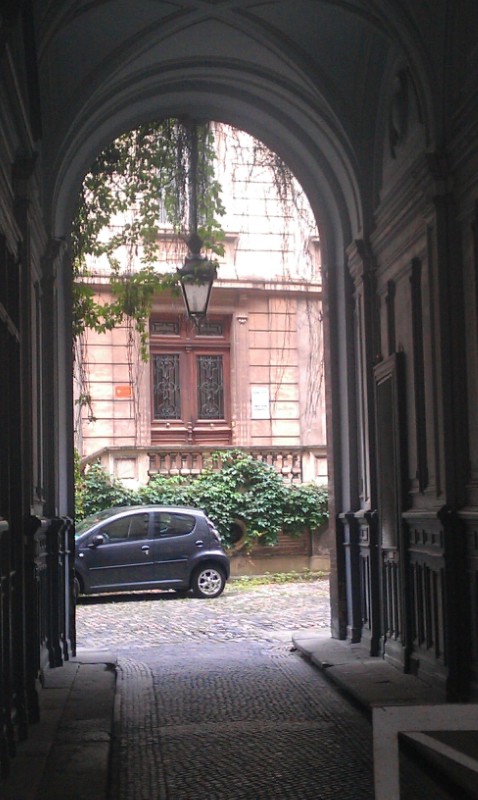 I hope i captured a bit of the spirit and history of Toulouse through these doors and what's behind them.

After sharing a vintage armagnac cocktail recipe what lands in my mail box, Salty Snacks a how to 'make your own chips, crisps, crackers, pretzels, dips, and other savory bites' (Ten Speed Press, September 2012).

The 160 pages paperback by Cynthia Nims packs a bunch with 75 ways to salty snacks heaven.

Some like Tempura Green Beans with Tapenade Dip' leave you wondering if it calls for Shochu or a glass of Provence rosé.

My first pick from the book comes in as many flavor variations as there are regions in Italy according to Cynthia Nims. 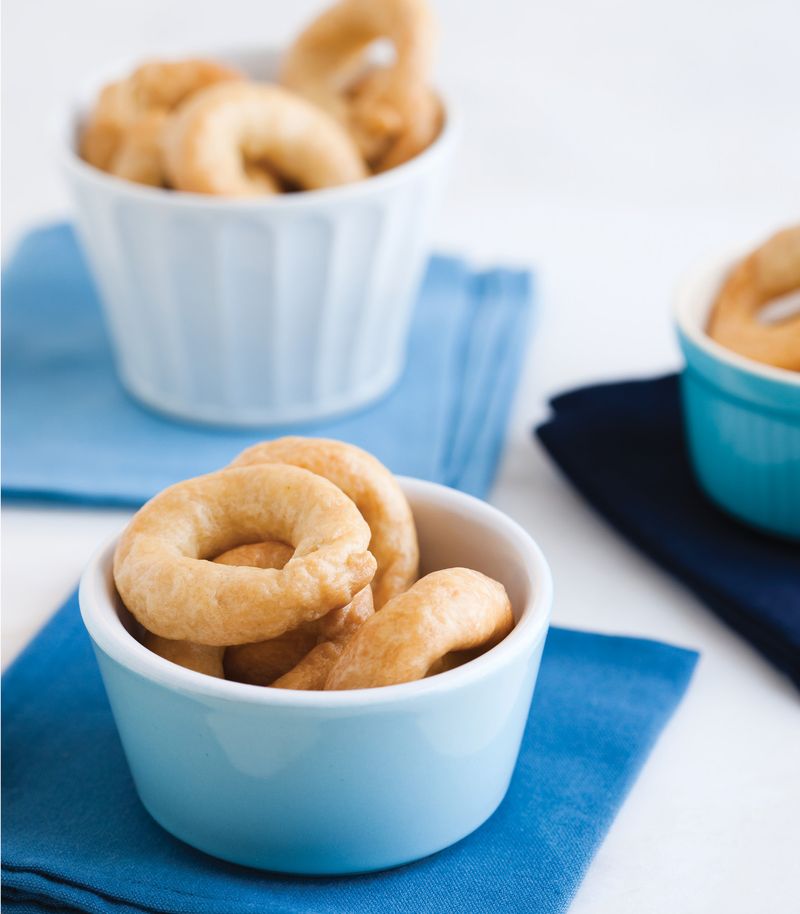 Stir together the flour and salt in a bowl. Add the wine and olive oil and stir until a cohesive dough forms. Shape into a ball, cover the bowl with a towel, and let sit for 1 hour to allow the flour to absorb moisture from the liquids.

Turn the dough out onto the counter and cut it into 8 even portions. Roll 1 portion of the dough into a rope about 20 inches long and 1/2 inch in diameter. Cut the dough rope across into 5-inch pieces and form each piece into a circle, gently pinching at the ends to seal. Set the formed dough on a baking sheet while rolling and forming the remaining dough.

Preheat the oven to 350°F. Line a rimmed baking sheet with parchment paper or a silicone baking mat.

Bring a large pan of salted water to a boil over medium-high heat. Gently add 6 or 7 of the taralli to the water and simmer until they rise to the surface, about 2 minutes. Scoop them out with a slotted spoon, drain for a moment over the pan, and arrange them on the prepared baking sheet. They won’t expand much while baking, so can be close together but should not be touching. Repeat with the remaining taralli, allowing the water to reheat between batches as needed. Bake the taralli until lightly browned and crisp, about 45 minutes. Transfer the taralli to a wire rack to cool.

When all the taralli have cooled, arrange them in a basket or bowl for serving, or store them in an airtight container for up to 5 days.

You might not be familiar with Armagnac yet are eager to try new cocktails. 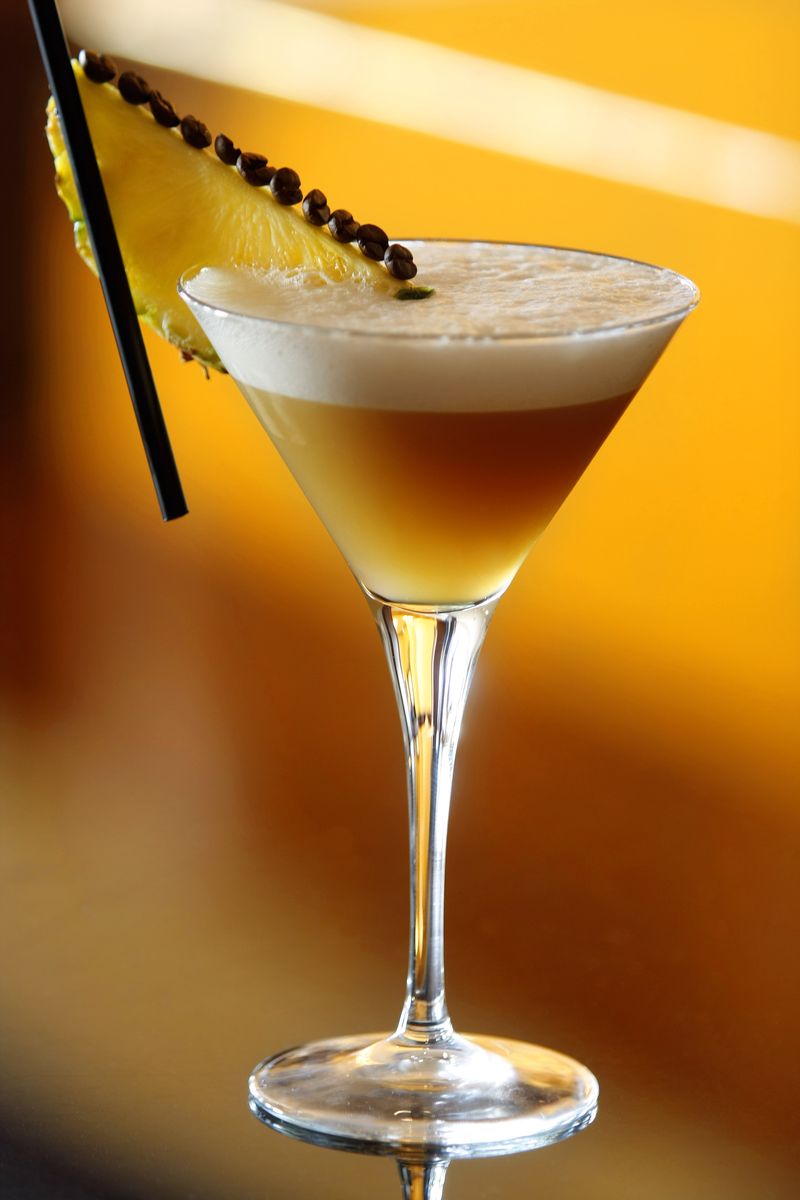 One of them offers a taste of Vintage 1937 and the Emerald Coast.

Method : Pour all ingredients in a mixing glass full of ice cubes, stir then pour using a strainer in chilled Martini glass.

Origin : This is a variation on Côté d’Emeraude cocktail recipe by the team of Coq à Paris (Opening October 2012).

It was created with Armagnac Bordeneuve 1937 which might not be available in the U.S.

When in Toulouse, the Canal du Midi will cross your path numerous times.

It brings you back to life in the slow lane. Bike riders, skaters and joggers can enjoy Canal du Midi thanks to extensive bike and jogging lanes that grace its banks.

On my second Saturday in the Ville Rose in August, I walked alongside Canal du Midi and rested my head on one of the trees offering a bit of a shade on sunny days.

After visiting the Musee Toulouse-Lautrec in Albi and nearby cathedral, I could not resist a quick walk around the Marche Couvert across the street.

One of the stalls offers appetizing and well priced prepared foods from Asia.

The owner was proud to let me know that all items on sale are prepared by her and her husband. 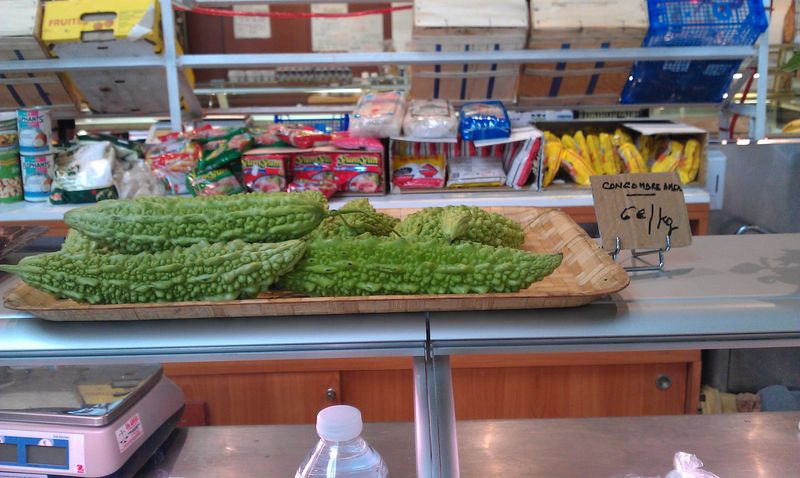 They even grow some of the produce they use for their dishes including Spiky Cucumber (labeled 'Concombre Amer' or 'Sour Cucumber') above which she told me is popular in her native Cambodia as well as in Japan.

Spikes from an Asian French garden for Tokyo Thursdays # 241

In an earlier post, i mentioned how i noticed during my 2 weeks stay in Europe that the French seem to be more concerned with their water use-waste than most of us in the USA.

Another thing I noted on Toulouse streets is public recycling bins.

Besides their usefulness, they work as a gentle visual reminder.

It is much more effective than a do not litter sign.

Appeals to our do-gooder citizen side

I noted while reading on the topic that New York City has a similar program that I has not registered on my radar yet called NYCWasteLess whose focus is also public space recycling, from parks to neighborhood spaces. 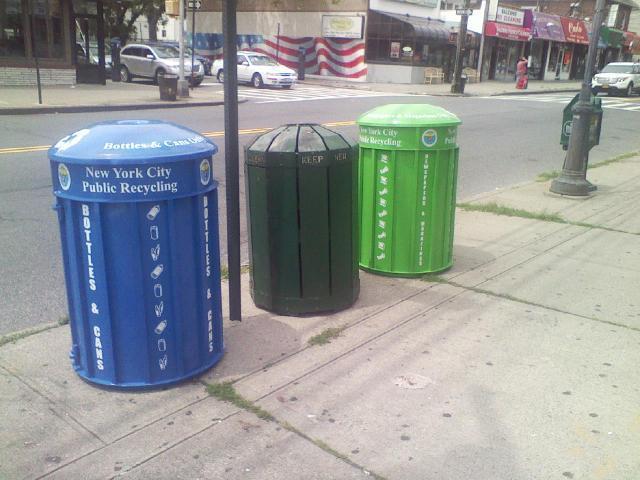 Previously: Holiday Trip by Car, Find out How Much Fuel you Will Use thanks to fueleconomy.gov

4 weeks ago before my departure for France, I had the pleasure to talk Salumi with Michael Ruhlman, co-author with Brian Polcyn of Salumi, The Craft of Italian Dry Curing (W.W. Norton, August 2012).

As I was about to leave for Southwest France, Michael was just coming back from the region, Agen to be precise.

Q: Michael, let's start with an obvious question, why Salumi?

After success of Charcuterie which I also co-authored with Brian and especially the chapter on dry cured meats, our publisher asked us for follow up that would focus exclusively on that hence 'Salumi'.

Q: What is difference between Charcuterie and Salumi?

Charcuterie covers a larger field. It includes pates to terrines and confits. In Italy, Salumi is pretty much exclusively defined as dry cured meats (muscles, sausages) except for mortadella.

Q: How large is contingent of food lovers who want to know that jowl of pig is source for Guanciale and that Coppa is made with neck muscle?

Interest is actually larger than you would think. It is not unusual to find food fans who want to delve deep into nose to tail cooking and explore its techniques. 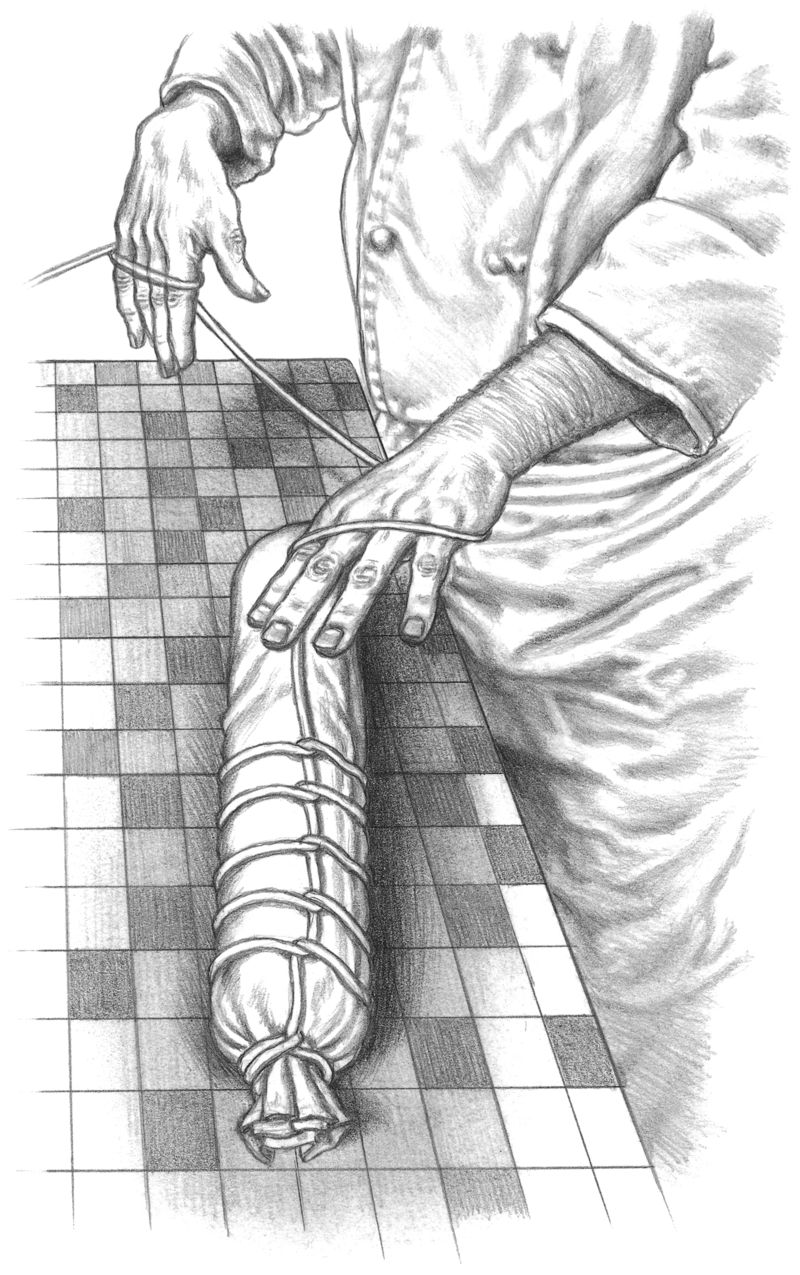 Q: Salumi offers around 10 salami recipes, which is your favorite?

Q: What was division of labor between you and Brian while writing Salumi?

Just like with Charcuterie, Brian handled the recipes while I wrote all the texts. To understand the process, I did learn to break the hog. Brian has a great source for pigs in Ohio. Brian of course has more hands-on experience as he preps and cures meats for his 2 restaurants and also teaches charcuterie class.

Q: Why are peaches and plums good accompaniments for coppa and large calabrese salami?

These fruits pair well with saltiness of coppa and salumi. Their presence in book's photos was influenced by fact that they were in season when photo shoot took place in New York. Brian was there. I was not.

Q: How many readers of 'Salumi'  do you hope will try their hand at making their own salumi? Any recommendations on where should they start?

I hope many will give dry curing a try. Coppa is a good place to start. Ask your butcher or meat purveyor for muscle cut out of shoulder. All muscles are an easier step to dry curing. 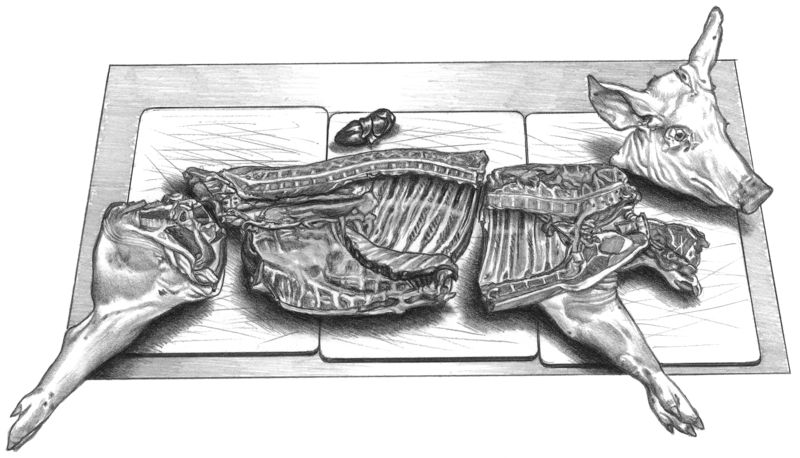 Q: Are some urban dwellers attracted to Salumi and salumi making by the physical aspect of it (cutting, tying)? Are there specific challenges they might encounter?

I don't know about physical aspect of the work. In big cities like New York, the main challenge readers who want to venture making their own salumi will encounter is space (small kitchens). They should settle for small batches that can be stored in mini fridge dedicated to that purpose.

Q: Among the recipes you share at the end of the book, would some be OK without meat?

A pasta carbonara is of course out of the question but why not with others. Recipes were included for those who will not take the step of dry curing themselves yet like to buy beautiful salami and can put these tasty cuts to use with these recipes.

Q: What would you drink with the Coppa, Orange and Onion Salad recipe?

It calls for a rustic, simple, Sicilian red. Touring salumi makers, we tasted their cuts with bread and red wine.

Q:  While doing research for the book in Italy, what was your favorite moment, best encounter?

It was at Spannochia, a farm/culinary school in Tuscany specializing in Cinta Senese pigs. They teach their students to be proud of their work and care about the quality of the ingredients they use. A young American, Elisa from New Jersey, was one of the students when we visited.

I hope this interview aged gracefully in the 4 weeks it took me to publish it. Thanks Michael.

Bian Polcyn is the chef-owner of Forest Grill and Cinco Lagos in suburban Detroit. He also teaches charcuterie at Schoolcraft College in Livonia, Michigan.

(* Illustrations reproduced with permission from W.W Norton from Salumi 'The Craft of Italian Curing' by Michael Ruhlman and Brian Polcyn, illustrations © 2012 by Alan Witschonke Illustration)

Oui, Need Wi Fi in France, Ask for Wee Fee, By the way Free WiFi is not Free

Some English words and terms getting used in France sound quite different from the way we pronounce them in the US.

Brownies someone brought to a picnic were pronounced something like 'brunnies'. It took me a minute to realize what person was talking about.

In need of a WiFi (Why Fy) connection and wanting a quick reply, ask for Wee Fee or Oui Fee as they make it sound. If you browse through potential connections near your location on your computer, phone or tablet and see Free WiFi as one of the choices, it does not mean free access. Free is the name of the service.

A few French indiosyncracies I encountered.

(* Photo of Game Workshop, 10, rue Hautefeuille in Paris 6eme, Quartier St Michel-Odeon, taken on Monday when it is closed as it is on Sunday)

While taking a walk alongside the Canal du Midi this afternoon, I got a taste of the slow life.

I first saw a boat that had just passed the 'ecluse' (lock) near Pont des Minimes in Toulouse. 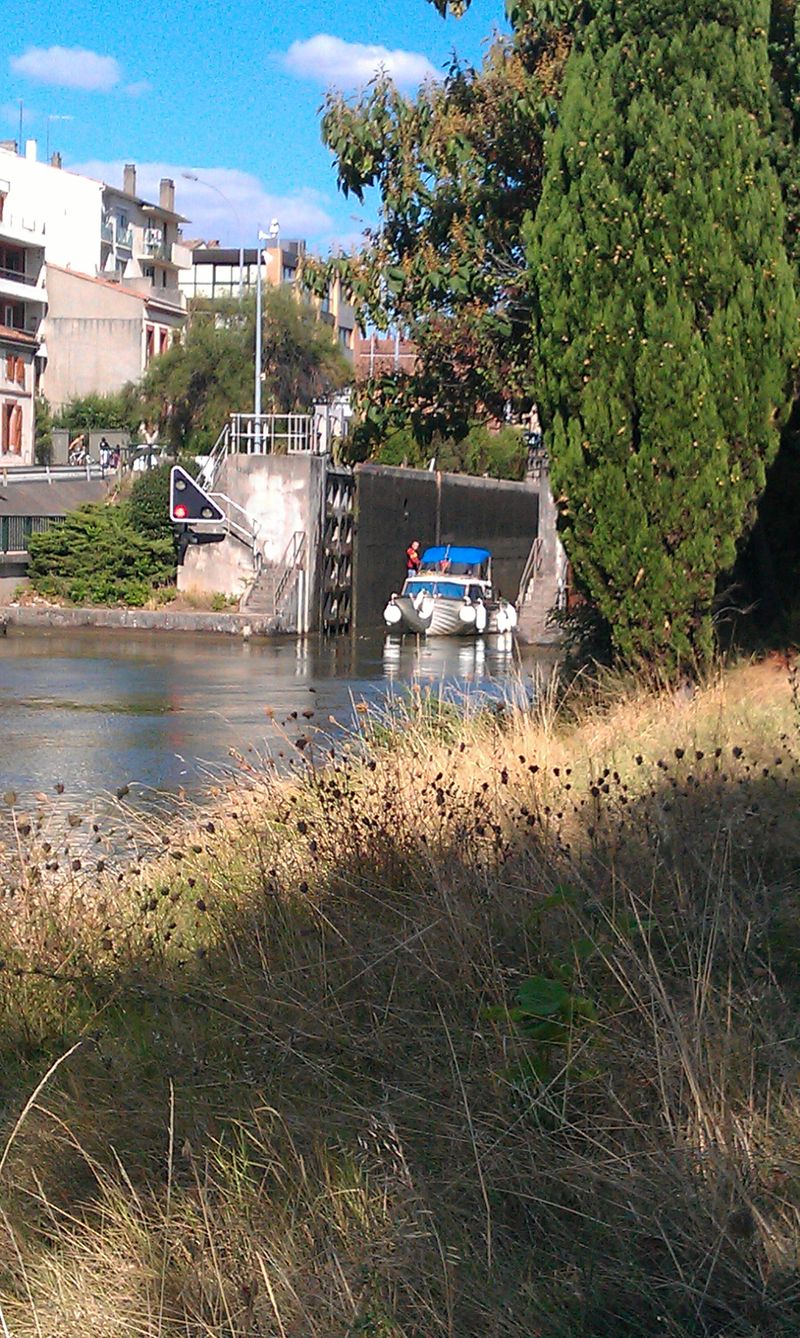 15 minutes later another vessel was making its way towards the 'ecluse' in the opposite direction.

Life in the slow lane

Pink like a Bicycle Heart Racing up a Facade, Yellow like a Lemon Tart, Paris in Color

Before heading for Paris (by train) on Sunday morning, I had to dive into a little book that offers Paris in many flavors.

With Paris in Color (Chronicle Books, April 2012), photographer and blogger Nichole Robertson applies the adage 'a picture is worth a 1000 words' litterally and offers a book without any words except for those captured in the photos she shares.

Each chapter is organized around a color. Book opens with 'la vie en Noir' (the color black) and concludes with yellow. Besides 'Guimauve' and rose petals', 'Rose' chapter offers 'Hearted Bicycle' racing up the facade of a building.

Jaune could not be without a Metro 'M' sign, flowers that brighten any room and of course a lemon tart. 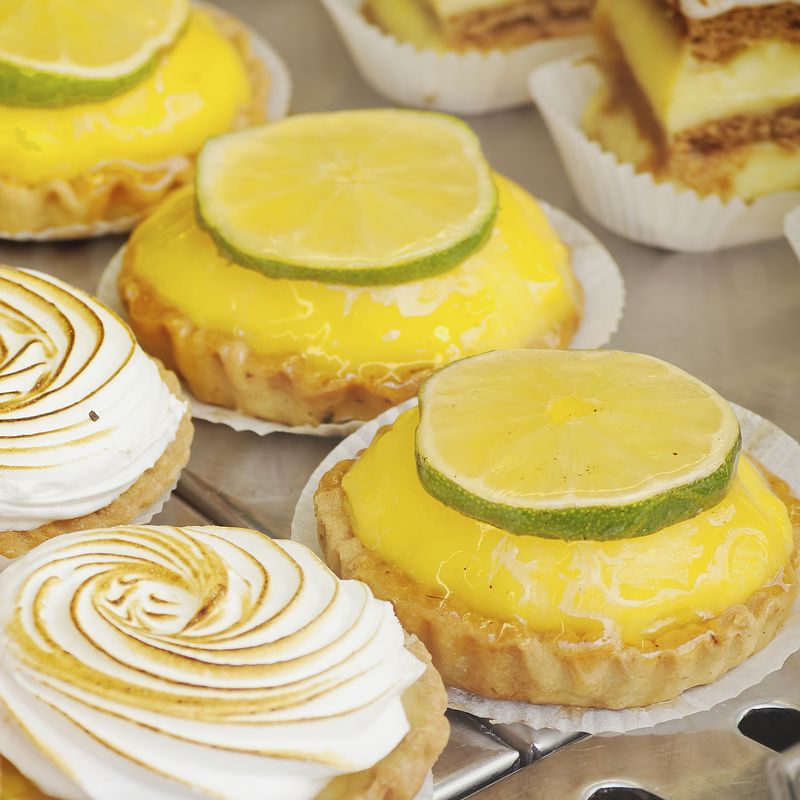 (* Images reproduced by permission of the publisher, all rights reserved, from 'Paris in Color' by Nichole Robertson-Chronicle Books, 2012).