I have mentioned exhibits by Idea Generation Gallery time and again.

Blame it on memories and music maybe.

Idea Generation Gallery launched a Christmas Gift Guide with Prints of works they displayed recently for Sale either online, on the phone or by popping into the gallery itself if you live in London or happen to be there.

There's Bowie, Iggy, Lou, Syd Barrett, Debbie Harry, motorcycle mamas and much more, yet if there was one photo I would pick it would Jazz like Trumpeting Lee Morgan on my Wall (below).

For £375.00 you get an Unframed Black and White Giclee Print on Archival Paper (20 x 24”) part of an edition of 50 worldwide. Signed and numbered by John Hopkins .

Beyond the music, literary types might want the black and white William Burroughs shot for their library room.

If you want any of these delivered to their intended recipient in time for Christmas, all orders must be received no later than December 6, 2010.

Gifts that mean something...

On November 26, the town of Eauze hosted the 49th Concours des Grandes Eaux-de-Vie d'Armagnac which I shortened to 49th Best of Armagnac Awards.

For this 2010/2011 edition, producers, technical experts and the best noses in the field had the hard task of working their way through 113 eaux-de-vie d'Armagnac divided in 6 categories: 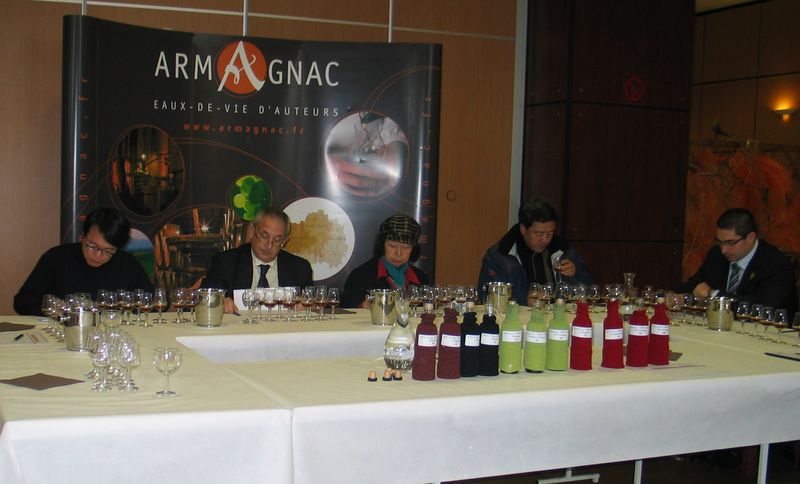 And the winners are, most of them at least

Armagnac Hors d’Age 20 ans and over

What a day it must have been for the judges, who needs Black Friday?

There is so much to chew on in Cooking for Geeks (O' Reilly) by Jeff Potter that I did not know where to start or stop when doing the prep for this interview.

To get things in gear, I decided to stick to 12 questions, here they are:

Q: Jeff, Cooking for Geeks, is it more about hardware (kitchen tools) or software (recipes)? What part does experimentation plays?

It's really about the approach to both. Kitchen tools and recipes are just aids for creating a meal and a good experience.

Q: Are hands really best tools in the kitchen? What would you list at Number 2 and 3?

Hands, sense of smell & taste, and eyes are probably the most important things; but if you're going with a more traditional definition of a kitchen tool, a cutting board and measuring tools (volume/weight scale) would be quite important.

Q: You disapprove of Kitchen Tools as a gift, if you were to break that rule would you start with a fire extinguisher?

There are so many differences between, say, something like knives that it really boils down to personal preference. This is why I don't think one should give kitchen tools as gifts in general. If you are going to give a gift, I'd start with a gift certificate.

Q: Can you explain the notion of 'smelling chemicals' while cooking?

Our sense of smell is based on sensing chemicals—our noses are quite literally chemical sensors—so when it comes to cooking and smell, anything you detect will, of course, be some set of chemical compounds from the foods that you are working with.

Q: What prompted you to make ice-cream with a Lego contraption?

Just to see if it could be done! Not everything has to be practical; sometimes it's just amusing to see what one can do.

Q: You quote Meg Hourihan on dangers of following recipes blindly, besides burning ingredients other drawbacks you would like to share?

Recipes can become crutches—you can begin to rely on them to the point that you depend on them to be able to turn out a meal. It's like calculators—if you never do arithmetic "by hand", then you can get to a point where you can't do it by hand. 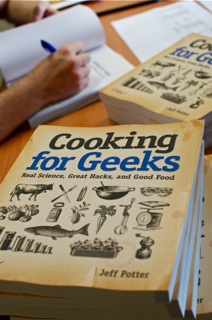 Q: Enlighten us on 'fat washing' and alcohols?

Some chemical compounds aren't soluble in water, but are in ethanol. By taking something like bacon and soaking it in, say, vodka, those compounds will dissolve into the liquid.

Liquid smoke is one of those fascinatingly simple things. It's just smoke vapors distilled through water! For all the fear about nasty, artificial chemicals, it's nice to see that something like liquid smoke is actually so "clean", in a certain sense.

Q: How and why can you do flash pickling? Does it alter the end flavor?

Flash pickling is basically a method for getting a liquid "into" a food. Take cucumbers, which have lots of small air pockets. By putting them into a vacuum chamber, surrounding them in a liquid of your choice, evacuating and then re-pressurizing the environment, the air gets removed and then the empty pockets refill with the surrounding liquid, allowing you to inject whatever flavored liquid you like into the food.

Q: Why are so many geeks and techies into food?

I think I'd put it more broadly: why are so many people in general into food? I think this is because it's a fun pastime, and no longer viewed as a chore, but more of as a luxury or hobby.

Q: Is there a danger in being too analytical about food , getting lost in process rather than enjoying sheer pleasure of cooking and sharing food with others?

It depends on the person—as long as you're having fun with it, then I think that in and of itself can be pleasurable.

Q: What was your worst cooking misadventure ever?

Thanks Jeff for taking us on your Magical Mistery Kitchen Tour.

Should I add a 'don't try this at home' notice to some of the experiments shared above?

Label is a Work of Art, Wine is Masterful, La Barbarine, Cote Rotie

Most profiles of Yves Gangloff describe him as the Accidental Winemaker.

While paying a visit to his brother, an artist who lived and worked in Condrieu, Yves Gangloff met Mathilde, fell in love with her and stayed. 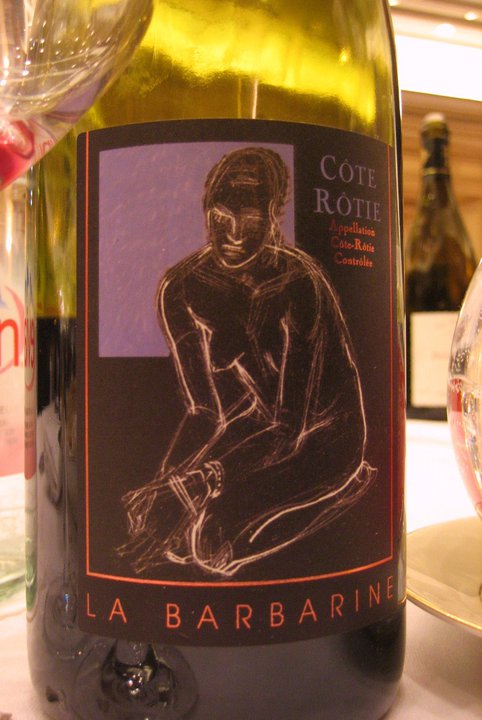 As for La Barbarine, "the Barbarine cuvée comes from younger vines on granite-based soils in the Côte Blonde" according to producer notes by Berry Bros & Rudd.

The most recent tasting details I could find are on La Barbarine 2007 (by The Vine, its Japanese importer):

"This has richly perfumed aromas of cassis, pepper, date, earth, coffee and black fruit confit.  The palate is elegant and refreshing with gently astringent tannins, thus good with food.  It's long and complete."

Wines by Domaine Yves et Mathidle Gangloff are known for their concentrated flavors and personality. The tiny size of the property (around 4 hectares) makes them sought after.

I have not had the pleasure to taste any Gangloff wines yet.

The artwork on the label caught my eye before I had a chance to find out that the wine is masterful.

(*Photo by Mei Hong, Thanks for introducing me to La Barbarine)

November 26 is Buy Nothing Day in USA, November 27 for Rest of the World

Did you sit outside a mall since 3 PM on Thursday as I heard some people in Los Angeles were, to get pole position for the Black Friday deals?

Was it worth loosing sleep over? Does shopping justify skipping Thanksgiving dinner with family and friends?

For meateaters there is Meatless Monday.

Shoppers of the world can hold off their horses for a day and stay home on Buy Nothing Day which appropriately is on November 26 in the US and November 27 in the UK and other parts of the civilized world.

When everyday is a sale day, where is the fun?

Post Thanksgiving 2010, if you were sane enough not to join the frenzied shoppers, you might need turkey relief.

After Simply Ming One-Pot Meals (Kyle Books) by Ming Tsai landed in my mailbox on Tuesday, I thought it would be the right medicine. 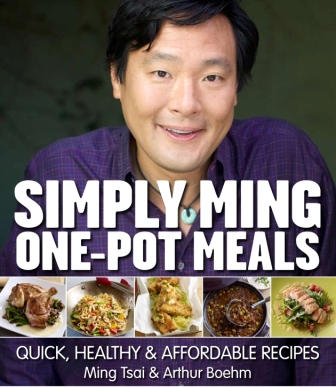 Simply Ming One-Pot Meals is the prize in the balance for our Black Friday contest.

We have one copy to give away, first come, first served.

Now can you enter the fray and hopefully win?

We must receive all answers by Noon (Eastern US time) on Thursday, December 2, 2010.

This contest is for US readers only. If you won anything from us in the past 60 days, please let others try their luck.

In case you are running behind schedule in the kitchen or just to get things started on Thanksgiving Day, here's one of the recipes shared by Diane Morgan in Skinny Dips (Chronicle Books). 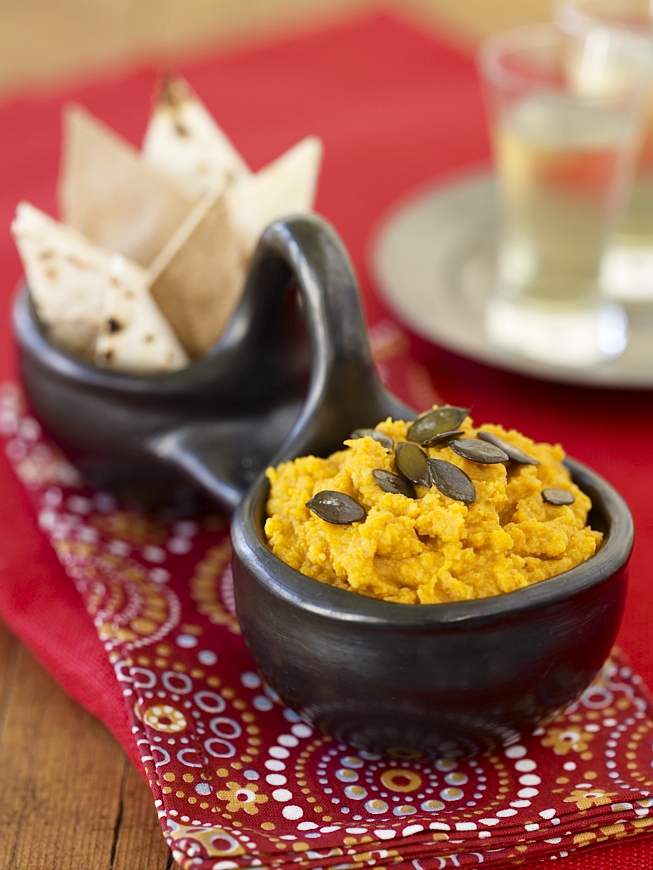 Seeking to broaden the flavor profile of hummus beyond the bounds of Middle Eastern tradition, I’ve combined pumpkin and chickpeas and an underlying current of spice, a little sweetness, and a touch of lusty garlic. This dip is perfect for autumn entertaining.

1. In a small nonstick frying pan over medium heat, warm the oil and swirl to coat the pan. Add the garlic and sauté just until beginning to soften, about 30 seconds. Add the curry powder and sauté, stirring constantly, until fragrant, about 1 minute longer. Stir in the honey, remove from the heat, and set aside.

2. In the workbowl of a food processor fitted with the metal blade, process the chickpeas until finely mashed. Add the pumpkin purée, ginger, salt, and the garlic mixture. Process until the hummus is smooth and puréed. Taste and adjust the seasoning. Transfer to a serving bowl. Cover and set aside for 1 hour to allow the flavors to meld. Garnish with toasted pumpkin seeds, if desired.

This dip can be prepared up to 2 days in advance. Cover and refrigerate. Remove from the refrigerator 45 minutes before serving.

(from Skinny Dips: 60 Recipes for Dips, Spreads, Chips, and Salsas on the Lighter Side of Delicious by Diane Morgan, Chronicle Books, August 2010, recipe and photo courtesy of the publisher,)

Suzuki for Sashimi, Or is it Mulloway

It all started with A Fish Called Mulloway by Carli Ratcliff (Hunter Gatherer, November 9).

Australians call it Mulloway or Jewfish while in South Africa it sometimes goes by the name dusky Kob.

Clean Seas has the Mulloway Story and shares the best use for different cuts (on page 3).

Suzuki Mulloway or Suzuki is how it is known in Japan.

The Shizuoka Gourmet in Seasonal Fishes 8: Suzuki/Seabass (Shizuoka Sushi) tells us about some of his favorite Suzuki dishes including the Simple Sashimi below. 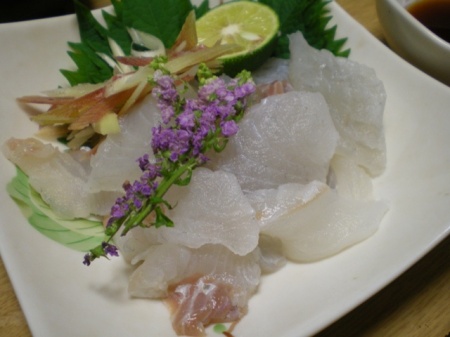 Belly Filet and Shoulder Portion are best bets for Sashimi according to Clean Seas.

Previously: Beer in Name Only, Happoshu and the Third Beer, Japan and the Taxman

Now in its 91st Year, Philadelphia Thanksgiving Day Parade is Oldest in the Country

If you learn it from the Mayor himself (Micheal Nutter), it must be true.

Now in its 91st Year, Philadelphia Thanksgiving Day Parade claims the title of oldest one in the country. 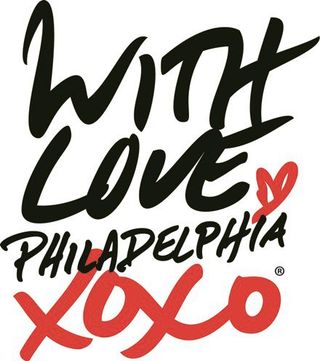 Put on your Bread Shoes, A Praspaliauskas Production

I started down the Baked Goods as Art road courtesy of Grand Designs on Food (Phaidon Agenda, November 24), made a stop at Dezeen Design Maagazine which led me to the home of DADADA Studio from Vilnius (Lithuania).

As part of their Christmas Sale, they offer the unwearable Bread Shoes by fellow Lithuanians, twin brothers R and E Praspaliauskas. 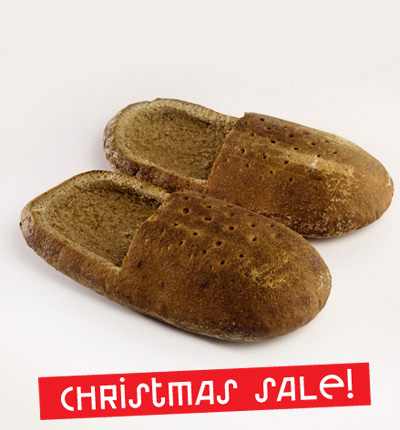 I doubt you will find anything close to these if you join the hordes for some Black Friday shopping.

(* Bread Shoes photo from the pages of Dadada's Xmas Sale)

Posted on November 24, 2010 in Food and Drink, Personal Organizer, Serge the Concierge, To Do Lists, Travel, Weblogs | Permalink | Comments (0)