Repeat after me, I don't care about my job, I care about the paycheck

Of course, people will not be chanting these words like a mantra.

Can a job become like a difficult relationship where the person you are trying to be close to does not reciprocate?
Can it become unhealthy with too much emotional baggage attached to it?

In our age of enlightenment, should we still try to find meaning and a sense of purpose in what we do?
Would it be better for most of us if we looked at a job as a way to pay the bills as many blue collar workers did and still do?

Posted on August 31, 2009 in Health, Personal Organizer, Serge the Concierge, To Do Lists | Permalink | Comments (0)

I don't remember ever seeing a 'Moose Crossing' or 'Bear Crossing' warning signs while driving around New Jersey.

Passing them on my way back from Vermont added a whiff of adventure to our week-end outing.

As we reached Massachusetts, more urban, should I say civilized signage with North Adams and the MASS MoCA Art Center which I need to add to my must see list.

Hope you had a rich Sunday.

Posted on August 30, 2009 in Personal Organizer, Serge the Concierge, To Do Lists, Travel, Weblogs | Permalink | Comments (0)

I am actually staying in Plainfield, near Montpellier (Vermont), about 1300 habitants, long ride from New Jersey.

Plainfield is home of Goddard College and has a nice local co-op.

I am as close to a foreign country (Canada in that case) as can be.

Posted on August 30, 2009 in Food and Drink, Health, Serge the Concierge, Sunday Picks, To Do Lists, Travel, Vacations | Permalink | Comments (0)

Giving People a Seat at the Table, Social Good Conference

My morning at the Social Good Conference...

After a recap by Adam Hirsch of what the Summer of Social Good stood for, the very beautiful and very active Shira Lazar reminded all of us that we should 'wake up grateful' for all we have including things we take for granted like running, clean water.

Then Randi Zuckerberg showed that Facebook is not just about party life but also with causes such as Pink Chaddi against violence on women in India or We the Women for women's right to drive a way to give people a seat at the table, giving their voice a chance to be heard.

I unfortunately had to leave the event after Summer Rayne Oakes powerful presentation on Youth involvement in climate change issues such as in Australia with Youth Decide 09 (see video).

Thanks Adam for inviting me and giving me food for thought.

Heading to New York for Social Good Conference by Mashable, I decided since it was raining to take my car and use the parking facility.
I have an appointment right upon returning so it would save me a few precious minutes. In my rush to catch my train, I followed the instructions on the parking machine, entered my parking spot number, put my $20 bill in the machine ($5 daily fee) and realized one second too late that it did not give change...
It was all the cash I had on me.
Problem was the station does not have ticket machines so the only way to pay for train ride to New York was cash which I now was out of.
The train was already there so I headed for it and explained my quandary to the conductor.
He recognized me from previous trips and told me to get on board and not to worry. 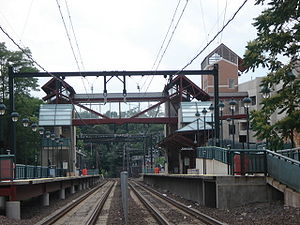 My Friday lesson is don't rush and be ready to be surprised by small acts of kindness.
Have a great day.

It might not be eerily quiet, there are still conversations going on and pieces being shuffled around yet Yasuda Mako suggests in Hanazono Jinja Aozora Kotto-ichi (Real Tokyo) that the flea market at Hanazono Shinto Shrine is a quiet oasis a few minutes walk from the noise and bustle of Shinjuku.

Even though Shinjuku Gyoen: East Meets West Meets..... France? (Fantastic Japan) made it sound like quieter corners can be found in Shinjuku Gyoen National Garden, the Hanazono Shinto Shrine, flea market or not sounds good for a refreshing break.

In Hanazono Shrine (10 Days in Japan, July 2009), Chris shares that "Hanazono Jinja is a Shinto Shrine, not to be confused with a Buddhist Temple.   I guess you’re just supposed to know.  The names give it away I guess.  A “Jinja” (神社) is a Shinto shrine, whereas a “Tera” or “-Dera” (寺) is a Buddhist temple.  At a shrine, you’re supposed to cleanse your hands and mouth at the water fountain with the cups (which shouldn’t actually touch your mouth, or your hands) wave some incense around you, then make an offering to whomever and say a short prayer at the altar…."

Chris also writes that "the small section of land that Hanazono occupies is a sanctuary from the rest of the city.  Immediately the noise and hustle disappeared" and informs us that "the history of Hanazono goes back some 300 years, dedicated to an Imperial prince from Japanese mythology." 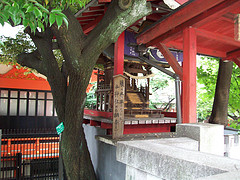 I borrowed one of the 10 Days in Japan snapshots (above) as an illustration.

Negrette, Fronton, Does it ring a bell in your wine mind? Try Le Roc Classique

Want to expand beyond the usual, like wines from the South of France, have you tried Fronton.

This small appellation a short ride north of Toulouse is the home of Domaine Le Roc, a Ribes family affair. 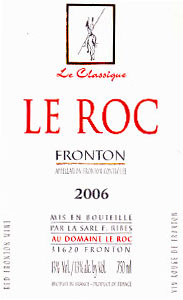 You don't see them often on the shelves so I was happy to grab a bottle of Le Roc, Le Classique (2006).

What distinguishes Fronton besides its small size is that it has its own varietal Negrette, reflects the color of the wine it creates I guess, dark and mysterious.

Le Classique is 70% Negrette whose roots Les Vins Francais tracks back to Cyprus, add to the mix, 20% Syrah and 10% Cabernet.

Tasting notes from the winemaker give this Classique, pain grillé (toast) and spicy flavors.

I would not mind trying their Rosé de Saignée if I could find it.

I am looking forward to Mashable's Social Good Conference on Friday, August 28 at the 92 Street Y in New York City.

This will be the coda to the Summer of Social Good initiative.

I will be attending only the morning sessions as client work needs to be done early afternoon.

There are still a few tickets left for those interested.

If you read this and want to meet let me know.

Google celebrates the 400th Anniversary of Galileo's Telescope, Tuscany does Too

I mentioned the events celebrating the 400th Anniversary of Galileo's telescope in a previous post and was happy to learn from Turismo in Toscana (the official and very good tourist guide for the region) before even using Google today that Google joined the party with its daily icon below.

Space Online Today spoils the party in Telescope is 400 years old by noting that there is a controversy as to who has the title of first creator mentioning Dutch Hans Lippershey as a close competitor to Galileo.

In any case Grazie Google!

Blame it on the Squirrels...Comcast Update

Seems like the haphazard performance of my internet connection over the past few days was caused by squirrels chewing the wire running from the pole to my house.

The tech guy from Comcast replaced it and I hope that was all there was.

Squirrels are a regular fixture in New Jersey and I discovered that local United Exterminating Company based in Cherry Hill made it its mission to help people fight these invaders.

I borrowed their picture of the Eastern Grey Squirrel as my illustration.

One thing I did not realize that some NJ residents for example members of the Ramapough Indian Tribe catch these little rodents and turn them into a meal, according to the NY Daily News.

A wild ride I had today from tech troubleshooting to exterminators to unusual main dishes.

Posted on August 25, 2009 in Food and Drink, Personal Organizer, Serge the Concierge, To Do Lists, Web/Tech, Weblogs | Permalink | Comments (0)