"The Domaine du Grand Arc was established in 1995, in the commune of Cucugnan. The vines, however, are far older. It lies in the heart of the spectacular Hautes-Corbières, in a place called the Devez. Part of the terroir of Quéribus, an impressive nearby ruined mediaeval fortress, it belongs to the southern Corbières AOC. It was love at first sight for Bruno and Fabienne in 1990, who immediately set up home with their two sons. The secluded valley that shelters the Domaine is dominated by two old castles: the great Peyrepertuse at one end, and Padern at the other. It was the site’s magical natural beauty that captivated them"

No sulfites were used for the 2008 vintage.

From cassis to apricots, the fruit notes are varied with a touch of spice to balance them. 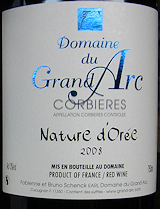 As Florence and Bruno say, "it's not because you are young that you have to be rambunctious"

This is only the second vintage for Nature d'Oree yet it shows great promise.

A wine that reflects its terroir, around $12

Besides reading scary stories in the summer (it makes you sweat), Japanese like to parade huge floats on a number of occasions.

Two August festivals light up the night with their giant papier mache floats.

It's already Friday in Tokyo as I am writing this and Spirit Parties (Metropolis, July 31) highlights a number of Summer festivals taking place around the country.

They start with Nebuta Matsuri (ねぶた祭り in Japanese) which runs from August 2 to August 7 in Aomori.

Here's Metropolis introduction to the event:

The Nebuta Matsuri was originally part of Tanabata, the festival of star-crossed lovers that’s now marked on July 7. It’s best known for its spectacular floats, which bear enormous papier-mâché lanterns depicting samurai warriors and characters from kabuki plays. After being paraded around the city for a few days, these floats are judged and the winners placed aboard a ship for a valedictory tour of the harbor. A similar event is held in nearby Hirosaki from August 1-7-though,confusingly, they change the name from "Nebuta" to "Neputa."

The difference between the 2 festivals, besides the location according to Frank La Riviere is "particularly in the size. The Neputa are roughly 20 meters high! they are build and stored to be reused in contrast to the Nebuta that are rebuild every year."

You can learn more about Nebuta Matsuri from the Official Aomori Nebuta Site (whose illustration I borrowed).

Floating above ground for Tokyo Thursdays # 98

Is Organic Food Not Healthier than the Average One? So says Food Standards Agency

I am not too wrapped up myself in whether not eating only organic food is evil.

Maybe the skepticism arks back to my economics class back in high school where I learned that labels and claims could be deceptive.

It might make a few people cry but Organic food not healthier, says FSA (Guardian, July 29) according to UK Food Standard Agency report after a study conducted by the London School of Hygiene and Tropical Medicine which finds "organic food provides no significant nutritional benefit compared with conventionally produced food".

The FSA writes that this effort from "team of researchers, led by Alan Dangour, reviewed all papers published over the past 50 years that related to the nutrient content and health differences between organic and conventional food. This systematic review is the most comprehensive study in this area that has been carried out to date."

The study sparked a controversy.

It does not contest the benefits of organic farming for the environment yet questions its nutritional benefits over conventional foods.

What are your thoughts?

The Kaese Chiefs from Wisconsin, Add Roth Kase to the List

OK, you've got all the boutique creameries from California but isn't cheese all about tradition, old fashioned heartland values, I got a few good to great cheeses from Wisconsin in the past few months. They also offer Grand Cru for the wine enthusiasts and Van Gogh for the art collectors.

How could you not love their smiley faces (above).

Posted on July 29, 2009 in Consumer Products, Food and Drink, Personal Organizer, Serge the Concierge, To Do Lists, Travel | Permalink | Comments (0)

Pig Heads at the Market, Inca Massage, Is it the Real Cusco, Cuzco?

Since a friend of mine just came back from spending 3 weeks in Peru including Cusco, I had to read Cuzco, Peru by the Numbers by Hal Amen (Travelers Notebook, July 27) so I could ask my friend if he felt the same way about Cusco especially since he stayed and traveled with the natives.

There is a consensus on calling Cuzco or is it Cusco the tourist capital of Peru.

Two things that stand out in the Travelers Notebook piece are the number of mentions on Inca Massage and the striking image of a Pig Head blood and all at Mercado San Pedro (pictured below, from Mercado San Pedro blog in Spanish). 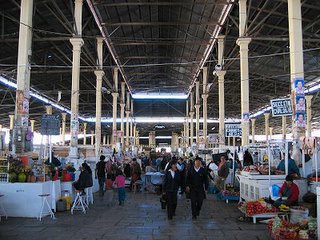 Googling Inca Massage and Cusco, I did find Hampi Wasy which offers them yet could not tell what differentiated this Inca from other types of massage.

For whatever reason the Pig Head picture reminded me of the cover of an album by 70's French progrock band Moving Gelatine Plates (picture above). 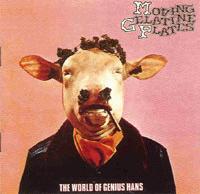 Getting back to the subject at hand, if you are looking for practical facts more than impressions on the city, Fast Facts-Cusco from Frommer's might be just what you need.

Adam and Eve and Thomas Jefferson in the Tomato Garden, Pomme d'Amour

The more you know, the less you know is one of these true truths as Donald Rumsfeld would say.

Going back on the tomato trail before getting a first look at The Tomato Festival offered by some New York restaurants in August 2009, I unearthed the Pomme d'Amour.

Blame it on You Say Tomato, I Say 'Love Apple by Diane Roberts (NPR, July 26) which made me want to know more.

"The first tomatoes grown in Europe were called "love apples" because they were related botanically to the mandrake, or "love plant," which was noted in the Bible for its reputed aphrodisiac qualities. In 1553, Swiss naturalist Konrad Gessner depicted the small-fruited "love apple" in a watercolor, and identified it in Latin as "poma amoris." Pomme d'Amour (French for "love apple") is similar to these small-fruit tomatoes that were mostly grown for ornament; however, the mild, pinkish-red tomatoes are ideal for garden snacking, salads, and drying."

Thomas Jefferson-Monticello actually sells seeds for these Love Apples most years but not in 2009. 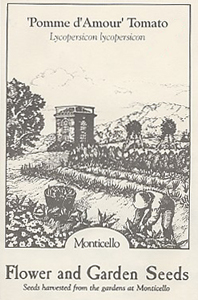 I used their packaging above as an illustration.

Are tomatoes really an aphrodisiac?

Add them to the list with oysters, asparagus and chocolate?

Thinking Outside the Bottle, Sustainable Winemaking in California and Elsewhere

Anna Clark in Green Wineries Embrace Innovation from the Fields to the Bottle (Green Biz, July 27) takes a look at how California winemakers approach this challenge.

It involves much more than the vineyard.

Sustainable means using bio-fuels for your farm equipment, solar or wind power for the winery's buildings.

Then there is is the issue of packaging.
At this point most wines come in glass bottles. A first step is to use lighter bottles.

Even though at first it looked heretic, more and more wines the world over come with screw caps.

Could it be that the future of wine bottles lies in the adoption of PET (as is the case with Yellow Jersey, pictured here) commonly used for soft drinks?

Besides being lighter, Chaz Miller in Waste Age (2007) wrote that Polyethylene terephthalate (PET) finds a second life on the floors as "half of all polyester carpet made in the United States is made from recycled PET bottles."

Recycling the bottles is one aspect. Lighter packaging is relevant in shipping cost and carbon footprint as most wines travel long distances from the producer to our glass.

Curious about some of the wineries who practice what they preach in California, in addition to her article Anna Clark compiled a list for us all (see below):

Could you Get Sued for Multitasking if Bad Decisions Occur?

Despite laws banning the use of cellphones while driving, some cannot kick off the addiction.

In Why e-mail must disappear from the boardroom (FT, July 27) David Beatty and J Mark Weber open their piece by  stating that "boards should ban the use of BlackBerries, iPhones and all other e-mail-enabled wireless devices in their meetings. The distractions they create are undoubtedly contributing to bad decisions. This, of course, is true in meetings all across organisations. But in the case of corporate directors, failing to ban such devices may, in principle, represent a breach of their fiduciary duties to shareholders."

They ask "when a corporate director starts replying to an e-mail, which task is receiving attention: the message or the meeting? The most plausible answer is the message, which means that the director who is working on his e-mail is dedicating scarce resources to something other than that for which shareholders are paying. If your lawyer billed you for time spent working on someone else’s project, it would be considered negligent at best."

Could execs and board members get sued for bad decisions caused by smart phone disorder?

In a more general context, I personally find it annoying when workers of any rank and position use texting in full view of customers.

I agree with the authors of the FT piece that their mind is on something else than work. Besides not paying attention to what's going on, it is quite rude.

David Beatty and J Mark Weber might have focused too much on e-mail when for the under 30 crowd "text" is what matters.

Wasn't the Boston bus driver involved in a collision texting his girlfriend at the time of the accident?

Besides stopping the constant chatter (or at least calling for a pause at times), could we rediscover silence and stop piping music all the time everywhere including restrooms.

The sound of silence for Monday Work Etiquette #100

Sea, Sex and Sun, Is Topless Sunbathing on the Wane in France?

In a Shakespearean twist, the Brits are asking Should you go topless – or not? (The Guardian, July 23).

In this piece while Joanna Moorhead considers the practice as liberating, Zoe Williams states that "Sunbathing topless is a French thing, while wandering around entirely naked is a German/Austrian thing" and that "Toplessness is not about practicality, it's about glamour. I emphatically don't mean "glamour" as in "glamour model". I mean glamour in the old world sense that one's own judgment is unimpeachable. After all, what kind of a person would stare and point and laugh? An unsophisticated person. Probably an English person."

The story has been the fashion buzz in the past week or so in besides The Guardian, Jezebel and the pages of NY Magazine and Time magazine.

Was the practice limited to France anyway.

I once saw three generations of dutch women practicing it near Barcelona, Spain.

Is it all about how your attributes look after all?

Should we blame the changes as much on tanning salons as on cancer fears.

In Abbey Road: 40 Years - 40 Imitations (July 26), The Independent reminds us that imitation is sometimes the best compliment one can get.

Amongst the 40 Album Covers, should I call them that without sounding antiquated, a few stood out including New York City's Soulful Road which manages to both pay a tribute to the Beatles album cover and also to New York Magazine typeset. 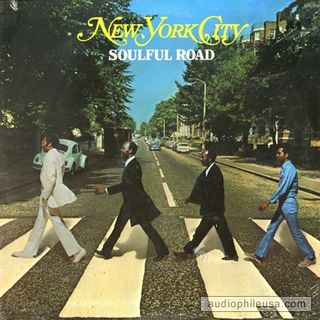 The picture above was discovered on Audiophile USA site, a must visit site for Vinyl Junkies.

Walking the other way!