I decided to go ahead ans pay my first visit to Japan Day this Sunday, May 31.
I took the C line and after cutting across Central Park got to the Easy Meadows grounds where the event took place.
There was an atmosphere of bonhomie and family friendly fun in the air with dance and drums on and near the well set stage.
Many ladies donned kimonos while the younger crowd was all cosplay.
What kinda killed the fun was the long lines especially for the food offerings, at least a 100 people queuing up and since there was a different line for each treat, the process had to be repeated over and over.
I sampled first the dumplings and second went for the miso soup line since it seemed the shortest.
Unfortunately we had to stand in the heat for a good amount of time as the soup was being readied.
There were lines also if shorter for the games (Go and others), the Robot Battle even for the tourism table.
Longest of non food lines must have been for the Kabuki face paintings.
I will return next year if there is a better flow.
Maybe they are a victim of their popularity or it is just that I am impatient.

I have to thank a friend for reminding me that the last Sunday of May is not just Mother's Day in France, it is also when the Japanese community in and around New York shares its food, culture and traditions with the rest of us.

It starts with Japan Run at 8am which I think has closed its registration at this time.

The festival proper kicks off at 10 AM with free food samplings offered from 11 AM on...

Plenty of entertainment from the Chin Don band Zakuro with special guest Joey Morant (between 10 am and 12pm) to J Pop by Orange Pekoe (2.30 to 4.45pm). 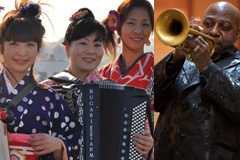 I learned from the program that Chin Don bands go back to the EDO period (19th century) and originally were used for advertising and marketing purposes.

For each edition, Japan Day showcases a visual artist, Keisuke Takahashi in 2009, visual director for Nibroll.

A free event for our Consumed to Thrifty times...

And if you cannot make it to Japan Day, you can always read one of my 89 Tokyo Thursdays stories.

Posted on May 30, 2009 in Event, Food and Drink, Music, Personal Organizer, Serge the Concierge, Sunday Picks, To Do Lists | Permalink | Comments (0)

They might be renowned for their Sea Salt Chocolate offerings but the creative minds at Chocolats Henri Le Roux in my native Morbihan (Brittany) are not resting on their laurels.

Not to be confused with Electro Pop singer La Roux, for Mothers Day 2009 which in France and some other countries takes place on Sunday, May 31st, they offer 'Esprit de Jardin' (not Sprit in the Sky) which comes in two flavors, Basil and Tomato or Pepper and Strawberry. 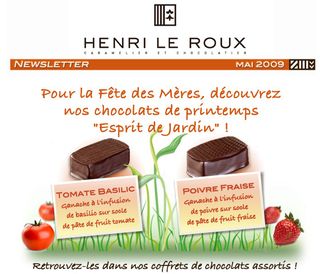 Posted on May 29, 2009 in Consumer Products, Event, Food and Drink, Luxurious Sensible, Serge the Concierge, Sunday Picks, To Do Lists, Travel | Permalink | Comments (0)

On My Must Taste List, Mas Champart Rosé 2008 from Languedoc, Great Buys

I did not make it to the Kermit Lynch tasting this week at Union Square Wines yet I found a consolation prize, reading their Staff Tasting Recap: 5/20/09, Rosés and Southern France Reds (Inspiring Thirst, May 28).

June is almost here and since the slew of tastings in March and April, I realized that I have not tasted any new Rosé wines. I was reminded of it when seeing a nice bottle of Bandol (around $30) the other day on the shelves at Whole Foods.

My consolation was to see the good people at Kermit Lynch wet my thirst with the 2008 Languedoc Rosé from Mas Champart  (pictured below, from their story). They say it seems to have a cult following.

Here are their tasting notes:

"So how can it be a cult wine at $13.95? I guess it doesn’t matter what the price is, people want this wine and the domaine doesn’t make much. The Champart Rosé is delicate and fresh with an underlying herbs de provence that makes it, quite frankly, similar to Bandol in style. It’s not quite the intense complexity of Bandol, but it sure is close."

I learned from Cambridge Wine Merchants (UK) that "Mas Champart is owned by Matthieu and Isabelle Champart, who moved to the Languedoc in 1976. Matthieu was originally a farmer in the Aube, whereas Isabelle originated from Paris. Their estate began as a run-down house surrounded by 8 ha, but now comprises 16 ha of vineyards entitled to the St Chinian appellation, as well as some arable crops and orchards. They began, like many others, by selling their grapes to the local co-operative, but soon struck out on their own. Their first vintage for reds brought success, and they started producing a white wine in 1996."

Let me find that wine now!

Posted on May 29, 2009 in Consumer Products, Food and Drink, Personal Organizer, Serge the Concierge, To Do Lists, Travel, Weblogs, Wine | Permalink | Comments (0)

Sharing The Guardian Guide to Green Travel, Thanks to Issuu

I discovered Issuu thanks to a publisher mentioning the service for a peek at Woodstock, the book, one of them I mean.

What Issuu is, does?

They allow professional publishers and amateurs alike to let the world know about their magazines, books and other writings in digital form.

Since Travel and Green Issues are regular topics on 'Serge the Concierge', I decided to use Issuu to share The Guardian Guide to Green Travel (below) with you.

Posted on May 29, 2009 in Books, Consumer Products, Personal Organizer, Serge the Concierge, To Do Lists, Travel, Vacations, Web/Tech | Permalink | Comments (0)

Tokyo Beer and Blog, A Monthly Get Together: Locals and Expats Alike

Sounds like I am following a beer thread this week from Lloyd Cole Traveling Musician European Beer Report to Beer Dinners at the Publican in Chicago, yet there was no conscious effort on my part to do so.

Rather than always go back to the same sources, I thought it was time to look for new windows on what's happening in Tokyo and Japan.

Which is how I stumbled upon Tokyo Beer and Blog which brings together once a month Locals and Expats Alike for Beer and Conversation with a touch of geekyness. 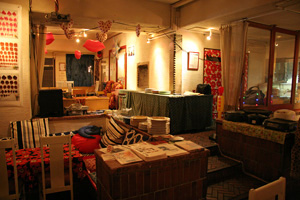 Their May get together took place May 28 at The Pink Cow in Shibuya which looks like a funky place (see picture above, from their site).

The event was organized in collaboration with Beer for Books to raise funds for Room to Read to supply books to kids the world over.

The Tokyo Chapter of InterNations, a community for global minds which I joined recently was also part of the mix.

I discovered Tokyo Beer and Blog thanks to Jim Grisanzio's Photo Report on the April event.

Previously: Farming as the New Punk Rock in Japan

Eager to learn how to turn a hog into edible treats such as pâtés, salami, prosciutto join the crew at the award winning Fatted Calf Charcuterie at Oxbow Public Market in Napa for a Basic Pig Butchery Part I.

You will learn amongst other things how to make your own sausage.

The class is on June 20th, costs $125 per person and includes lunch, some wine and your share of the sausage project.

When I think Choucroute I think beer.

A Chicago temple to all things pig, the Publican, offers Beer Dinners with a focus on local brewers and local food on the last Sunday of each month.

The 4 course dinner costs $45 with an additional $20 for beer pairing.

The latest event (in May) was with Jolly Pumpkin from Dexter (Great Lakes, Michigan) according to their notes.

I learned from the Interview of Brewmaster Ron Jeffries (Drink Craft Beer) that Jolly Pumpkin produce only oak aged beers.

and Saucisson and the Happy Pig...An acquired taste for the French

Posted on May 27, 2009 in Consumer Products, Event, Food and Drink, Personal Organizer, Restaurants, Serge the Concierge, To Do Lists, Travel, Weblogs | Permalink | Comments (0)

Who is Lloyd Cole some of you might ask?

Back in the 80's, Lloyd Cole and The Commotions were popular fixtures of the British Pop charts...

Mr. Cole's lyrics tended to be heavy on literary references so I did not expect him to share beer tasting notes in his European Beer Report (May 16, 2009), what Lloyd Cole drinks while on tour in Europe.

On a Spring 2009 trek, he found his favorite, Muller's Altbier brewed by Pinkus/Muller, in Munster (Germany).

As for the British creations, his 'favorite Northern Pint'  comes from Timothy Taylor, a West Yorkshire brewer. 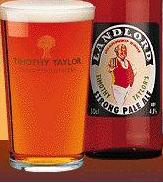 I would like to try their Landlord Beer (pictured above) just for its name.

A toast to Lloyd.

Posted on May 27, 2009 in Consumer Products, Food and Drink, Personal Organizer, Restaurants, To Do Lists, Travel, Weblogs | Permalink | Comments (0)

This Summer, Make your Moving Experience a Green One

For many people, at least those with school age kids, summer is the time when changing homes, cities, states, countries happen.
Back in April 2007, I mentioned Earth Friendly Moving now renamed Rent a Green Box which provides part of California with a solution to the cardboard box waste (see video below).

They work in their area with Go Green Moving whose vehicles are powered by bio-diesel.

I did find as well Green Van Lines in Texas.

Emily B. Hager took a look at some of these companies and services in Moving Day Without All the Waste (NY Times, January 2009).

On Earth Day 2008, Moishe's , a New York area Moving and Storage company announced it was going green.
The company also shares practical tips on their Moving Guide if you go local. Going abroad, check their  Expat Central whose most recent story is Moving to Mexico (May 26, 2009).

I was pleasantly surprised to see Henkel share some best Green practices on Making Your Move with planning, recycling and waste prevention advice.

Posted on May 26, 2009 in Consumer Products, Green Day, Personal Organizer, Serge the Concierge, To Do Lists, Weblogs | Permalink | Comments (0)

Flex Your Mind and Your Muscles, Get Inspired as I did at Storm King

One of my best decisions in a while was to drive on Sunday to Storm King, a sculpture park in Mountainville, New York (Hudson Valley).

The last leg to get there on Route 32 took us through a detour in the countryside due to the local Memorial Day Parade.
Once we reached Storm King there was ample parking.
The attendants were relaxed and friendly.
Towards the end of our tour, I heard one of them describe his first impressions of Storm King as a golf course where aliens had landed.
The aliens would be giant sculptures of course.
All types of materials are put to use from plastic, to metal to grass as in the Maya Lin installation.
Tires find a second life.
You climb a hill and stand in awe of the view. 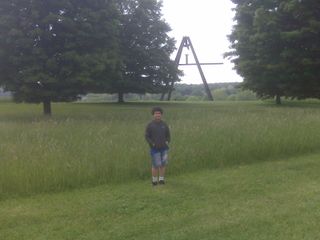 This is one of these rare places where you can flex your mind and your muscles.