Wine Dating, Yes We Can with Grape Vine Social (London and UK)

As Valentine's Day is getting close, you might be looking for a date yet would like to meet someone with common interests.

If the world of wine looms large in your life, with Grape Vine Social you might find a companion while educating your palate.

To take part in Grape Vine Social activities, you have to live in the UK as they offer events only in London and the British Islands.

No boomers it seems as they quote the 24-38 age range for most of their events including a Valentine's Bubbly Tasting on February 13 in London at The Master Gunner. Sounds like a pirate den to me.

Has anyone given them a try?

They landed on my radar thanks to Off the beaten track, unusual dating tips including table-football dating (??) by Kate Abbott (The Guardian, January 30)

Related: Polish your Wine Knowledge with Able Grape, a Search Engine for Wine

I was saddened to learn via another boomer music fan that British musician and songwriter John Martyn had passed away on January 29, 2009 at the age of 60.

He was one of these voices that found a home on Island Records in the 70's and 80's with albums like Solid Air or the emotionally charged Grace and Danger.

Take sea and sun add books to the mix and you get the Hay Festival Cartagena (Columbia) which opens on January 29 and closes February 1st. 2009 is the fourth edition.

Since my last visit to their site which at the time was in Spanish only, they were kind enough to add an English version.

They tease us into joining them by sharing that "time here is a gift of pleasure and imagination and romance. Please join us to share new stories and ideas, the finest seafood on the planet and as much dancing, laughter and life as you can handle."

If I made it there, I would definitely have checked Jon Snow offering his views on "From San Salvador to Baghdad, living with the Gringos".

If like me you can only taste this festival of the mind from afar the Hay Festival Cartagena de Indias Blog will offer a day by day account. 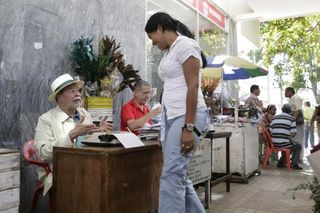 I borrowed their picture (above) of Mexican writer Antonio Sarabia writing his (?) loves letters outdoors.

Tokyo Metro Posters 'This is not your living room' Metro Etiquette

I was checking if anything fresh had been added to Hitotoki Tokyo where short stories offer snapshots of life in the city.
Nothing new under the sun yet their blog page led me to Tokyo Metro Posters which offer riders some Metro Etiquette.
Instead of don't try this at home they suggest we reserve the actions and bad behaviors for our home. 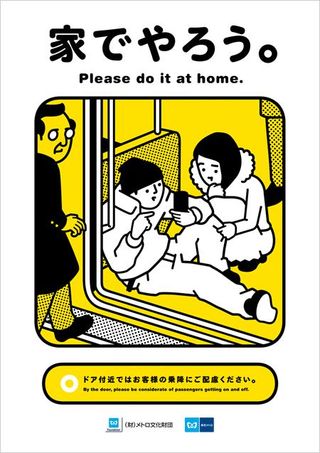 Their first release for 2009 (above) could be titled 'This is not your living room'.

They might survive their meal but I doubt that the unlucky few mentioned in Blowfish testicles poison seven in Japanese restaurant (Guardian, January 27) will be repeat customers of the Tsuruoka establishment.

I did learn that in order to serve this 'delicacy' known as Fugu to Japanese you need a fugu licence.

The owner of the Tsuruoka eaterie did not have one.

While asking if Fugu is the deadliest fish Setsuko Yoshizuka teaches us that "in western Japan, fugu is called "fuku," which means to blow or happiness" and also that "the kanji (Chinese characters) used to write fugu indicates river pig."
Besides being hazardous to your health 'fugu" dishes are painful to your wallet as the writer reports that "one meal can cost $100 to $200 per person at a famous restaurant".

Bocuse d'Or or IKA, Which Event is the True Culinary Olympics?

Now I see that the Bocuse d'Or which took place on January 27 and 28 is also being reported on by the some media outlets under the same title.

Elaine Sciolino's article (January 28) appears as Culinary Olympics begin in France on Google even though the piece itself goes by the less attention grabbing Norway wins the Bocuse d'Or competition title.

She reports that Geir Skeie, the 28-year-old chef at Mathuset Solvold in Sanefjord, Norway was the winner.

I borrowed the winner's picture (above) from his profile for the Food and Fun festival which took place in Iceland.

Both the German and the French event happen to be in their 22nd year.

I hope this will not start another European conflict.

Ray of Sunshine amidst the Gloom: The Good News from South Africa

In the morning I try to get a daily dose of news accompanied by a cup of espresso thanks to my beloved Financial Times.
Lately, there are days when I wonder if I should open the paper as there is not much to cheer.

Amidst this ocean of gloom, I was happy to discover a ray of sunshine, The Good News from South Africa.

The site is dedicated to share positive things happening in South Africa for example the announcement that Production has begun in Cape Town on the film version of Athol Fugard's apartheid era classic, "Master Harold and the Boys" (January 27).

They are part of a broader local initiative, The Movement for Good , a network of organizations that work together to inspire and mobilize South Africans to become active citizens for good.

A great reminder that little things can add up and have an impact.

Wanna be a Wine Tourist? If Spain is on your mind, Catavino could Help

The next best thing to owning a winery and working the soil might be to discover the land where it all came from.
Call it embracing the terroir, wine tourism, eco-tourism even if your favorite wines and winemakers are of the organic type.

After writing first about Spanish wines then adding Portugal to the mix, Gabriella and Ryan Opaz decided to approach their subject in a broader fashion.

They just relaunched Catavino to embrace the culture in the diverse growing regions and the food that makes many of the Iberian wines shine.
They also share some hard earned tips on good places to stay, best ways to get to these places and related tourism fare.

So if you wanna be a wine tourist and Spain is on your mind (or Portugal) pay a visit to the new and improved Catavino.

On the menu as I write is Sesimbra: A Seafood Lover’s Paradise in Portugal by Andrea...

Made me hungry, time for lunch...

A Spanish Pick:
4 Steps in the Right Direction: 'Cuatro Pasos' (Mencia 06), A Red Wine even a Bear could Love!

I could not help but stop what I was doing when I heard Are environmentalists fascists in disguise ? as one of the questions posed in a BBC Interview of Jonah Goldberg promoting his book Liberal Fascism: The Secret History of the Left from Mussolini to the Politics of Meaning, published by Penguin.

The argument is a bit over the top yet controversy can spur conversation.

Some of us, whether reformed smokers, newly vegetarian or onto any other newfound passion might show missionary zeal, lack of humor or perspective and lack of respect for dissenting views, yes we can?

That's why I try to keep my Green Day musings on the practical rather than the high minded side.

Flirting with controversy for Green Day # 63

Related: Meat Eaters, No Sex for you with VeganSexuals...A New Trend?

Last week: Sleeping Naked is Green...Really? Of Books and Nighties

I could have asked a friend and neighbor who has a good knowledge of China but instead relied on collected information.

For those of you who like myself have a no -existent to limited knowledge of the Chinese calendar, these few pointers from China Page bring some light on the Chinese New Year subject.

Celebrations in Hong Kong are tagged as World's Happiest Party I learned thanks to Joyce Hor-Chung Lau of Globespotters. The Happy Ox below (borrowed from the Hong Kong tourist office site) must be the mascot. They include Fireworks on Tuesday January 27 at 8pm on Victoria Harbour between Central and Tsim Sha Tsui and for horseracing fans and gamblers the Chinese New Year Race Day on January 28 (midday) at Sha Tin Racetrack.

Happy Chinese New Year to those of you who celebrate.

Other January 26 Events around the Globe: January 26th, 2009 is Australia Day