While commenting on a number of things I read recently and replying to a few e-mails, I realized that there is more than money to going 'From Consumed to Thrifty'.

Rather than run after a myriad of projects, can we learn to be nimble.
Could we learn how to hit the 'pause' button so to speak?

In what other ways can we change our daily life?

Let me credit Stephanie Booth and her Climb to the Stars for getting me thinking anew about the Consumed to Thrifty thread.

By the way, I offered a Panel for South by Southwest Interactive (2009 Vintage) exploring this topic.

It is titled: 'From Consumed to Thrifty: Strategies for a Good Life in Hard Times'.

I will ask for your vote on this project starting August 8.

Have a great day!

Fabrice Hyber plants Seeds and Thoughts at WATARI-UM in Tokyo

Ideas that got their start in the wildness of Rural France have landed in Tokyo thanks to the Seed and Grow exhibit by Fabrice Hyber.

Calling it an exhibit is a bit reductive has it combines watercolors describing nature in action as well as real plants and weeds so visitors can smell nature as well as touch it.

"To inspire us, Hyber has placed transparent plastic boxes of bees, earthworms and flies on the fourth floor, urging us to observe their movements and maybe to replicate them in negotiations with our own environment. The transparent beehive stands out for being connected to a gallery window via a tube, through which the bees come and go as they please — this exhibit is not an isolated objet but a nexus of ongoing, organic activity. Here, we are reminded of how bees function with a communal hive mentality, how earthworms decompose garbage and recycle nutrients, how flies transport all sorts of things (including pathogens). These insects perform by instinct what we labor to accomplish in our resource-rich, circulation-poor society."

Fabrice Hyber wants to seed ideas like he planted the forest in Vendee (France) where it all started.

Here is how he describes his approach:

"Art came from  seed of thought, the forest is created from seed of the earth, too.
Both make my head more and more flexible, and make me take new action."

As for the Seed and Grow project itself:

"Seed is the metaphor of thought and behavior to create art works.
And it also means origins of actual vegetables and trees that are getting bigger, grown by the power of the earth."

In a reminder that things miles and years apart are connected, Fabrice Hyber Vegetable Character (image below) is quite close to paintings by Arcimboldo (the 16th Century artist). 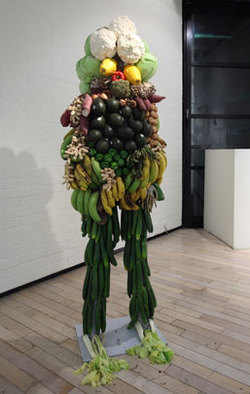 The Watari Museum of Contemporary Art is closed on Mondays.
Doors are opened from 11:00 am to 7:00 pm and Wednesdays until 9:00 pm).

I wrote about Arcimboldo in Faces full of Fruits and Vegetables...Arcimboldo...Musee du Luxembourg...Paris

In the garden for Tokyo Thursdays #49

Recent Museum Bit: Dinner and A Night at the Museum: Thyssen-Bornemisza in Madrid

"Eat for the Body, not for the Mouth"...Why Chinese Women Don't Get Fat?

Honestly when I first noticed Why the Chinese don't count calories a new book by Lorraine Clissold (actually her first), I could not help but think of it as a Chinese riff on Why French women don't get fat.

Sophie Morris (The Independent) offers her take on the ideas explored in the book and has 2 nutritionists, Patrick Holford and Ian Marber 'The Food Doctor' fact check the claims it makes.
Her title Use your noodle: The real Chinese diet is so healthy it could solve the West's obesity crisis would have made for a more catchy title.

One part where it seems there is broad agreement is that it should all start with soup.

Soup, or a soup-based dish, is present at every Chinese meal, often in the   form of a watery porridge, zhou. Western diets can be very dry, and   nutritionists compensate by urging us to drink more water, which the Chinese   would never do with a meal. Instead, they make a nourishing liquid food part   of the meal. And it's a great way of using up leftovers.

Holford says: "Thirst is often confused with hunger. Also, drinking does   tend to fill you up. So soups help you control your appetite."

Marber says: "I'm a great believer in soups before food. Miso soup, for   instance, or anything fermented – these are probiotics, which help release   nutrients from the food you are about to eat."

Another point of convergence is vegetables which should be half your meal.

As for the other suggestions in the book, I will let you judge.

I tend to view absolute statements on any topic with suspicion, maybe it's the St Thomas in me. 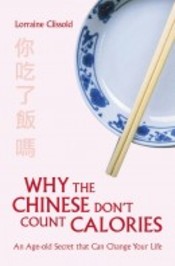 'Why the Chinese Don't Count Calories' (15 Secrets from a 3,000 Year-Old Food Culture) will be available in the US and Canada via Skyhorse Publishing in August 2008. It was first published in the UK (June 2008) by Constable & Robinson.

The UK Cover is my illustration.

On food fads and health: Is Raw Veganism Dangerous for your Kids?

Gift Ideas: Some Wine and Chocolate Pairings by Vosges Chocolates

After writing about the Napa Collection of Wine Infused Chocolate Truffles by New Jersey based J.Emanuel Chocolatier, I noticed that Vosges Chocolate offered some Wine and Chocolate Pairings as Gift Boxes.

In these summer months, I would go for the M. Chapoutier Banyuls, France, 2004 + Dark Chocolate Truffle Combo.

On a closing note, has anyone paid a visit to Sweet O in Glendale (Arizona)...They describe the place as a Wine and Chocolate Lounge...Sounds interesting!

Dinner and A Night at the Museum: Thyssen-Bornemisza in Madrid

I talked with my 10 year old about spending the afternoon at the National Museum of the American Indian in New York but since they close on Wednesday at 5:00 pm it was not worth the trip.
They do close at 8:00 pm on Thursdays.

Many miles away from my New Jersey digs, the Museo Thyssen-Bornemisza in Madrid goes a different route.

In July and August, their temporary exhibits remain open until 11:00pm.
One features the portraits and still lives of Avigdor Arikha, which they describe as a 're-born' artist who has died and returned to life several times (runs until September 8).
In a different style, you find Miro: Earth, a retrospective of the artist works from 1918 to his latest creations.

This second exhibit inspired a “Miró: Tierra Menu” offered by the chef in the EL MIRADOR DEL MUSEO restaurant  (opened in July and August only) located on a terrace on the top floor of the museum's new wing overlooking the Paseo del Prado.

Amongst the dishes listed are Mallorcan Abstraction, Tilled Earth and Catalan Landscape.

Let me try to find out what ingredients they are made of.

So here's a place where after a day at work you can satisfy your appetite for culture and then enjoy a good meal matched by a wonderful view of the city.

Could you ask for more?

Combined ticket for the exhibitions Miró: Earth and Arikha (only valid in July and August, from 7pm to 11pm): 5 € (about $8)...Free entry for accompanied children aged under 12 (except groups)...

Good for the Consumed to Thrifty crowd.

Found out about this unique offering on Globespotters

Related pieces: A Week of Art in London on 50 Quids (via Stephen Moss)

London was never a cheap place to do anything as far as I can remember.
The Guardian sent Stephen Moss on a mission: How to enjoy a week of culture in London on 50 quids (food and drinks included).

Stephen Moss gives us his report in The artful ticket-dodger which goes under the headline "Times are tough. The opera don't come for free. Can Stephen Moss survive a week of intensive arts-going armed with just £50, a Thermos and a packed lunch?"

Here is what he managed to see (quote from the piece) :

Sand sculptures on the Thames FREE

King Lear at the Globe theatre £5

Turning the Inside Out,
a performance by the Marc Brew company
with Nadia Adame in Kensington high street FREE

Secrets ... at Southwark Playhouse £6
(including beer and sandwiches)

Chinese video
bought from a Tibetan entrepreneur
on Hungerford Bridge £1.55

Rehearsal by the Naiades Ensemble
at St George's, Bloomsbury FREE

Another Consumed to Thrifty experiment

Any Tips for Culture on the Cheap in these Credit Crunch Times in you neck of the woods?

Turning your front lawn or backyard into an Edible Garden is not an American only trend.

South Africa has its own budding list of makeover services as Urban Sprout proves in 4 top edible garden growers.

I like the straightforward name of the first one: Eat Your Garden.
What Eat your Garden aims to achieve is a bit different  than what urban dwellers in developed countries have in mind, see point number 5 (bold). Let me quote their 'vision':

On the whole, they make a clear argument for the benefits of turning your water guzzler into a kitchen delight.

In the hubbub of the Chocolate Show (2007), I had paid only scant attention to what J.Emanuel Chocolatier (who happen to be from New Jersey like me) had to offer.
10 days ago while shopping at my local Whole Foods, I run into Tad Van Leer of J.Emanuel who on this Saturday was there to offer a tasting of their various lines.

Being a lover of both wine and chocolate, I offered to put their Napa Wine Truffle Assortment to the test.

The box of eight truffles is not a collection of ersatz wines.
The list reads like a who's who with in no specific order, Joseph Phelps Syrah (2002), Silverado Merlot (2004, 2 pieces), Trefethen Chardonnay (2005), Palmaz Cabernet (2004), Biale Zinfandel (2004) plus my 2 favorites Biale Zinfandel (2005) and Schramsberg, Non Vintage Sparkling.
They label it Champagne which irks my French roots but I will let it slide.

Zinfandel and Chocolate are often perfect together as I noted in Chocolate Crepes and Red Zinfandel Port for Wine Blogging Wednesday Number 13, a collaboration with pastry chef Glenn Schwabik.

Find them and taste them, let me know which you favor.

At Comcast, the Left Hand does not always Speak to the Right Hand

As you might have read, I had some connection issues in the past 2 weeks with my internet service.
It took 2 visits by Comcast technicians to fix the problem.
The second one was a bit more thorough.
The point I want to raise today is what seems like a lack of method in keeping track of what a customer problem  is/was and most important what was done about it, by whom and when.

The left hand does not always talk to the right hand (or vice versa).

As the technician was arriving for the second visit, I was getting a call from Comcast customer service asking me if I was happy with the results of the first one.
Obviously the customer rep was not aware that I had again experienced problems and that a new check up was about to take place.

I am sure the problem is not specific to Comcast. Is it to blame on Silos between different services?
What CIO Magazine described as Tilting at Silos: Fostering Teamwork Between Insulated Groups (June2007).

It would be good for all parties involved to know what's going on though.

It might also save time and frustration all all sides.

My 2 cents for Monday Work Etiquette #47

Related: Losing Internet Connection...My 16 Year Old does not Understand Why?

If someone has to get credit for pioneering the introduction of Japanese food to the American people it is Rocky (Hiroaki) Aoki, the founder of Benihana, who passed away on July 10.

I met him briefly while attending an event promoting the first Japanese Restaurant Week in New York.

His aging playboy looks and still accented English made him standout from the crowd of plain business execs sharing the stage with him.

Related: By the side of the other "Rocky' stands Keiko, a smart and sassy woman with a must have Japanese cookbook