From Alsace to Minervois...Marc Tempe's wine travels lead us to Domaine de Courbissac

A meeting between German film producer (and wine aficionado) Reinhard Brundig and Marc Tempe, an innovative winemaker from Alsace marked the beginning of a friendship.

It led them in turn to look for the perfect place to produce great red wines. After scouting properties in Southern France, they purchased Domaine de Courbissac (Minervois) in 2002 where they use biodynamic methods. 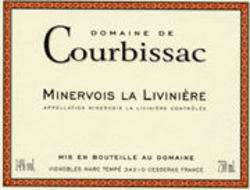 Located in the Petit Causse (near the Cevennes and the Montagne Noire) on limestone soil, "La Liviniere" benefits from ample sun and light precipitations which explains why the wine is rich and clocks in at 14% alcohol. It is unfiltered and reflects its terroir.

Retail price should be around $15.

If you have been reading this site on Thursdays you must have noticed that Japan likes to use characters be it from the animal or anime world on packaging, signs and in many other circumstances. 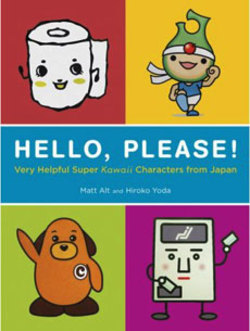 The paperback Hello, Please! Very Helpful Super Kawaii Characters from Japan by Matt Alt and Hiroko Yoda (published by Chronicle Books, August 07) offers many illustrations on the topic and also helps us understand why they are used, where they come from and their connection to Japanese popular culture.

Kawaii could be translated as cute. Wikipedia offers some illustrations of Cuteness in Japanese Culture such as Pikachu characters on some All Nippon Airways jets.

The book came to my attention thanks to PingMag.

That's all for Tokyo Thursdays #20.

Last week: Fashion goes to the Dogs in Tokyo according to 'Putting on the Dog'

The Spa at the Airport: Be Relax: Free 'Light Therapy' in Paris until December 30th

If you fly to Paris between now and December 30th, you can treat yourself to a free 'light therapy' session courtesy of Be Relax.

The sessions are offered "near boarding lounge E51 of Terminal 2E at Charles de Gaulle and near Gate R on the departures level of Orly’s West terminal are two dedicated light-therapy areas equipped with white-light emitting lamps, relaxation chairs, and a sound system playing soothing music".

I learned this much from Free holiday ‘light therapy’ at Paris airports by Nicola Clark (Globespotters).

This freebie is destined to promote Be Relax a new Spa at the Airport boutique/salon launching in Paris with plans to expand soon to other airports including Frankfurt, Milan, Rome and even Sharm el Sheikh.

The Globespotters piece also quotes the 'European Sleep Center' as stating that "a one-hour light therapy session per day for the first three days of a long-haul trip will help the body adjust to the new local time. For optimal effect, the light exposure should take place in the afternoon for a westbound flight and in the morning for an eastbound flight."

More pampering: The Clarence, Bono and the Edge Hotel Gig

After my used and tired Volvo wagon decided to give me new and bigger headaches a little over a week-ago, I went through a 'soul searching' process and decided that there was value in a smaller, more fuel efficient and new vehicle. It pollutes way less so in a way I practiced my Tuesday is Green Day on a Wednesday for a change.

Car rentals over the past 10 days became tiring. My new set of wheels is the very modest Versa, Nissan that is...without the Blue Tooth Enabled cell phone function...I did not jingle all the way...

That is pretty much all I accomplished today.
Will hopefully now have some peace of mind at least until the first payment in February!

I hope you had a great day.

Last week's Green Day: Perk up your Compost with Coffee 'Grounds for your Garden'

Merry Christmas to those who celebrate the holiday

My holiday will not start until late today as I am about to put my Concierge hat on and spend the evening tending to a client's party.

Before I get on my way, I wanted to wish A Merry Christmas to those who celebrate the holiday.

For the others, it is  a chance to enjoy a day of rest.

Posted on December 24, 2007 in Event, Food and Drink, Serge the Concierge, To Do Lists, Vacations | Permalink | Comments (0)

With Menu for Hope 4 extended through the week-end, it looks as of now that we pretty much managed to raise Fifty Percent More than last year.

What matters more than the money is the fact that as a result we will be able to help more people who benefit from the UN World Food Programme.

Christmas and the Holidays: A chance to be Unproductive

If we follow the advice of In humungous praise of holidays (Financial Times editorial page), Christmas can be a chance to unplug our tech tools, slow down for a couple of days.

Simply put we`can give ourselves permission to be unproductive.

Stopping the incessant chatter for even 48 hours might actually be the perfect medicine.

And please do not check your e-mail during the family meal. It will reflect badly on you.

Previous session: Now's the time to act on what matters...Discover what makes you tick!

Up North, No Bacon...Some Canadian Prizes for Menu for Hope 4

Since the deadline for your bids on Prizes offered for this 2007 edition of Menu for Hope was extended to Monday, December 24th (9 AM), let me highlight a couple of the Goodies offered by the Canadian contingent.

The Domestic Goddess coordinated the effort up North.

Catherine Jheon of Food for Thought (Canada) offered a selection of no less than 13 cookbooks (Prize Code: CA 01).

Anthony at An endless banquet went the spice route. No Pain d'Epice but a all spice package including "La Cuisine et le gout des epices" (Trecarre 2007), featuring recipes spanning the Spice Route from Indonesia to Andalusia and beyond.
Since it is written in French you brush up on 2 topics for the price of 1 (Prize Code: CA 05).

Interested by any of these, head over to the Donation Page and chip in.

Related: Don't Stop til you get enough...Menu for Hope 4 extended until Monday 9AM

Looking for something new and interesting, my eyes rested on a new arrival at my local store, Amanti Vino.
Before I knew more about this Santa Lucia , Vigna del Melograno (2005), the fact that it was imported by Michael Skurnik made it worthy of my attention.

First glass was a real treat. This wine stood its ground, bold, with rich ripe fruit and a real personality that might have something to do with being 100% made from Uva di Troia, a varietal new to me.

This grape is grown in Puglia or more specifically in the Province of Bari.
The Santa Lucia vineyards are located west of the town of Corato, 300 meters above sea level.
The harvest takes place in mid-October and the soil is Calcareous.

Uva di Troia is also used as a blending grape with Montepulciano, Sangiovese and others.

If you can find it, this wine should retail for around $15.

Recent wine bit: Your own private Episode of Wine Library TV, Dinner with Eric Asimov...Wine and Menu for Hope

More Italian Reds: Under the Tuscan Skies: Red Wines: The Blend of Poggiotondo

Don't Stop til you get enough...Menu for Hope 4 extended until Monday 9AM

By popular demand, our friend Pim decided to Extend Menu for Hope 4 throughout the week-end.

The dance will stop at 9 AM (US, Eastern Time) on Monday, December 24.

In case you missed my previous posts, Menu for Hope is a yearly fundraiser involving bloggers the world over and benefiting the UN World Food Programme.

Find All my Prizes on companion site Food Wine Travel.

I mentioned Some Great Wine Treats by Vinography.

Feel like spending some time in Italy, check this Cooking Class in Umbria.

Cannot make it to Europe get a Taste of Sweden delivered to your door.

Going down under Attica in Melbourne or Zuup in Kuala Lumpur are within reach.