My wife once took a job for a local florist painting a multitude of pumpkins for not as many dollars.

I suggested that her designs would have been less time consuming and more profitable had she offered them instead as themes for t-shirts or that type of things.

I did not think until reading For These Sculptors, The Medium Is Big, Orange and Stinky (Susan Warren, Wall Street Journal) that Mega Pumpkin Sculptor could be a job worth considering.

In our age of bigger is better, these monsters can weigh as much as 1600 pounds says the article.

It is a stinky job according to Patrick Moser (see Video) one of the Pros featured in the piece (some 20 years of experience).

Even if all this was just my imagination, it would be wild enough to make it Job Idea Number 5.

Posted on October 31, 2007 in Consumer Products, Serge the Concierge, To Do Lists | Permalink | Comments (0)

Our friend Graham of Noodlepie shares some Ghoulish Grub from squirming octopus to cheesy maggots, Graham Holliday finds some truly terrifying grub on Word of Mouth from his observatory in the UK.

In All Hallows, a well written trip down memory lane, Jim Coudal reminds us in a touching way how holidays and people we cherish are indelibly linked.
Which shows that there is more than commerce at work in Halloween.

Read the piece or listen to it.

Related: Halloween a la Chow: Passing the Bar and the Punching Bowl

If you want to find out the details of what's on offer in stores, online and in restaurants around the Big Apple for New York first ever Chocolate Week, check the Program Page on Chocolate Week NYC, their newly launched website.

I think the London Chocolate Week site is easier to read and navigate and I wish the Interactive Map for New York event was available instead of being 'under construction'.

If you do not have the patience to browse from A to Z online, the Chocolate Week New York program is also available as an insert in the current issue of Time Out New York.

A companion blog for quick updates on the event plus video and slides would have been nice.
They will surely do better next year.

Find my most recent picks for Chocolate Week New York in Swimming in Chocolate.

I have mentioned Pho Soup and Vietnamese Food a few times but cannot pretend having real knowledge of the cuisine itself.
I realized that even more after going to the Bun Restaurant opening party in Soho.
For once, a restaurant threw a party to celebrate its arrival on the New York restaurant scene and actually had you taste some of the menu.
I enjoyed most items but could not put a name on most of the dishes or the sauces that came with them.
I will have to make a follow up visit to fill these gaps.

All this leads me to the topic at hand, sites from 2 Vietnamese Americans. 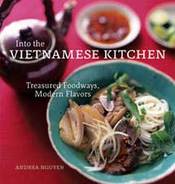 First, Viet World Kitchen by Andrea Nguyen who treats us in her most recent piece to a Jackfruit, Toddy Palm, Pomegranate and Coconut Sweet Soup known as Che Thai.

She is also the author of Into the Vietnamese Kitchen (Ten Speed Press, 2006).

I should add her book to my must read list.

Today gastronomy girl about town Cathy Quynh Nhu shares her secret weapon to start the day in Taste the Rainbow. For breakfast she gets her sugar kick from Sweet Sticky Rice.

I borrowed Cathy's picture of the treat as a second illustration.

So my day is not a complete loss. I did learn a thing or two about Vietnamese food and maybe you did as well.

I found both of them via Noodlepie by Graham Holliday whose food world stretches from the UK to Vietnam, not to forget Toulouse.

Related: Pho Restaurants in Hong Kong and Would love a few bites of this Cool Vietnamese Salad at 'Bun' Grand Opening Bash

On the Tasting Block for Wine Blogging Wednesday #39 (November Edition) is what our host Brooklynguy's Wine and Food Blog calls Silver Burgundy.
By that he means the less pricey ($12 to $25 a bottle) Cote Chalonnaise and Mâconnais.

Eric Asimov wrote Mâconnais: A reasonably priced wine of quality back in July.

This South of Burgundy wine region is known for whites such as Pouilly Fuisse or a staple like Macon Lugny Les Charmes.

As for the Cote Chalonnaise, David Downie offers a good overview as part of Burgundy: The Ultimate Wine Lover's Trip. Maybe the names Rully and Mercurey ring a bell with you, Bouzeron less so.

Check back here on November 14 and see what got us salivating.

Related: From Beaujolais to Umbria, traveling through wine

Posted on October 31, 2007 in Consumer Products, Event, Food and Drink, Serge the Concierge, To Do Lists, Weblogs, Wine | Permalink | Comments (1)

OK, I am kinda straying from my fare of food, wine, travel and the usual bit.
I just could not resist mentioning When It Takes a Miracle To Sell Your House By Sara Schaefer Munoz (Wall Street Journal).

According to her piece, out of superstition, shaken nerves or despair, house sellers from Bujews (or JuBus) to Atheists put their faith in St Joseph to help them take the weight off their shoulders and sell their home.

If you see someone digging their garden with a 'House for Sale' sign close by, they might be burying a statue of this patron saint of 'home-related' issues.

You can even buy online Home Sales Kits of St Joseph.

Reminds me of when one of my relatives made me throw peas in a well to help get rid of a skin disease in my early childhood.

Posted on October 30, 2007 in Consumer Products, Serge the Concierge, To Do Lists | Permalink | Comments (0)

Finding Beauty in Clutter with Chris Kirby...Getting Things Down

Now that Getting Things Done and productivity pornography as Marc Andreessen calls it has almost become a religion, I thought the Clutter Shelf by Chris Kirby had to be mentioned. 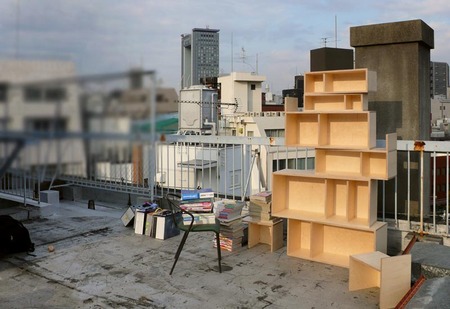 When things or people get too serious or fossilized in their ways, it is time to inject a little humor.

Chris Kirby is a Canadian Designer based in Japan. 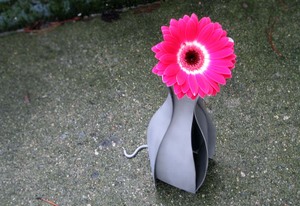 Besides these shelves, Chris designs many things such as lamps, vases, pepper mills and more and creates some of them with recycled materials such as this Petal Vase made with metal waste from a local shop.

I discovered him while browsing through the pages of DesignTide which opens in Tokyo on October 31st.

Yes Spring is in full swing down under.

Located in a barn like building , Destination Organic opened its doors earlier this year in Queenstown, New Zealand. The stone walls add warmth to the store (as pictured here). I have not had the chance to visit Queenstown or New Zealand yet so after taking a look at the store's offerings, I turned my attention to local resources in the natural field.

Let's start with Organic Explorer with gives intriguing lodging suggestions such as Ruatuna, a motel like Straw Bale home in the Bay of Plenty. They also open a window on the Maori Culture amongst other things.

For those of us with kids, Organic Baby offers, events, tips and guides.

If you suffer from Celiac disease, Gluten Free Living by Teresa Urquhart shares practical information on the topic including recipes.

Surely I only touched the tip of the iceberg. Take it from there and keep exploring.

Your suggestions are welcome.

Halloween a la Chow: Passing the Bar and the Punching Bowl

Instead of getting cheap, discounted candies and other sweet fare why not make your own Sugar Loaded Bars.

You might be inviting the whole neighborhood to listen to your best selection of Halloween music such as Screamin' Jay Hawkins, Dead Kennedys, the Flaming Lips or in a mellow tone Norah Jones.

Are you getting the Full Moon Punch Bowl ready.

In both cases the to do list comes to you courtesy of Chow...

Posted on October 29, 2007 in Consumer Products, Food and Drink, Serge the Concierge, To Do Lists, Weblogs | Permalink | Comments (0)