Chilling with Red and Rosé Wines...On Hot Summer Days and 4th of July

As the weather heats up and picnics, summer parties, holidays and lazy afternoons are with us, heavy chewy reds with a lot of tannins should not be your wine pick as Jancis Robinson reminds us in her Saturday column It's time for reds to feel the chill (FT Weekend).

Amongst her recommendations are a Te Mata Woodthorpe Gamay Noir 2006 from New Zealand which besides lush fruit has the additional distinction of bearing the New Zealand Sustainable Winegrowing Stamp.

From the less traveled Italian appellations she picked the Donnafugata Sedara Nero d'Avola 2005 from Sicily whose label illustrates this story.

I would suggest that a nice Rosé lightly chilled such as a good Bandol can be a crowd pleaser.

Other wines of Summer: Mesta Tempranillo, juicy and light

Posted on June 30, 2007 in Consumer Products, Food and Drink, Personal Organizer, Serge the Concierge, To Do Lists, Vacations | Permalink | Comments (0)

Beyond Walmart...Born to be wild, Bentonville gives you 'Slaughter Pen Bike Park'

There is life in Bentonville (Arkansas) beyond Walmart.

Outdoors Fans can enjoy a few hours of dust, dirt and fun at Slaughter Pen Bike Park  which was "created (I quote) to promote mountain biking and wellness for the area".

It combines more sedate trails for the average mountain bike rider just in search of fresh air with a wall ride and a dirt jump park amongst the more wild and dangerous attractions.

If you live in the US and are taking most of the week off for 4th of July, it could be one of these places where you can let some steam off.

Tell consumers what you can do for them not how great you are!

I have had numerous experiences of products, stores and services that failed to meet my needs.
In most instances it is because people who designed or set up these where in love with their solution and forgot to check with consumers to see if it met their needs.

Sometimes a simple test is all you need.

Have a conversation. Don't just tell your life story and how great you are and how your idea is gonna change the world.

Check people's reactions and you will get it right.

Reading What is the Problem you Solve by Natalie Ferguson who lives and works a world away from me in New Zealand prompted these few thoughts. Thank you Natalie!

On Service that needs Improvement: Could Bank of America be Earth and Customer Friendly?

Back in the saddle after Thursday 's 'Radio Silence'

A couple of deadlines kept me from writing anything yesterday...Sorry for the 'Radio Silence'...I am back today, Friday.

Posted on June 29, 2007 in Personal Organizer, Serge the Concierge, To Do Lists, Web/Tech, Weblogs | Permalink | Comments (0)

Our Brazilian friends innovate in more avenues than alternative fuels.
GE Brazil with the Risque-Rabisque and Whirlpool Brazil with the Nova Consul Aquarela (pictured here) started offering refrigerators that double up as white boards.

No more stick it notes, magnets and the like to hold your must do.
Write it straight on the fridge or even draw on it. Use an erasable marker of course.

Got the news from Springwise.

Bossa and More: Find the sounds of Bahia and Rio in the Bay Area

Have you driven a 'Twike' lately

Originally designed in Switzerland, this 2 seater combines Muscle Power (yours) with an Electric Engine. 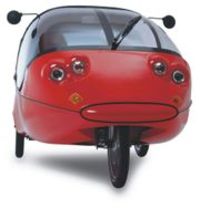 According to the Twike US site the vehicle retails for around (ouch!) $27500 and you have to get on the waiting list for 2008 models to get one.

Have you driven a Twike lately?

Drowning...41 Pounds of Junkmail per year for each average Jill and Jack

Following up on our Mailbox Clutter reduction program, after mentioning Green Dimes, a reader or maybe their PR person brought another service 41pounds.org to our attention.

They are based in Ferndale, Michigan and were founded by Tim and Shane Phannes after they discovered that the average Jill and Jack get 41 pounds of Junk Mail per year. These are US numbers I guess.

Related story: Cut your Junk Mail down to size with 'Green Dimes'

What's up with it is the first thing I wondered upon seeing the words?
Well I had to find out where Petaling Jaya was.  It figured in the Top 10 list of cities with readers of yours truly on Tuesday.
The fact is Petaling Jaya is a satellite city of Kuala Lumpur, you know Malaysia.

In the What's Up department you can also find 365 Days of Skywatching, I hope they took time to sleep.
Fans of 24 might have gotten messages from What's Up Interactive, Add to the mix What's Up a guide to Annapolis and the Chesapeake Bay.

End of the pedaling around the What's Up neighborhood.

Also from Malaysia to You: 'Tumpang', Pooling resources to get good deals

Take the test 'Are you Green for Telework'

Ever wondered if you could cut down on the hours spent at the office and all the money spent on gas, tolls not to mention the aggravation and the time wasted sitting in traffic?

First read about it on Webworkerdaily.

Previous 'Green' Story: Cut your Junk Mail down to size

No Travolta in the mix!

Music, Digital Media and Vietnamese Soup (Pho Soup) are on the menu of the Pho List which I have been a member of for a while now.

The site explores all things Pho food including its history and origins which they describe as phollows:

"Phở was born in Northern Vietnam during the mid-1880s. The dish was heavily influenced by both Chinese and French cooking. Rice noodle and spices were imported from China; the French popularized the eating of red meat. In fact, it is believed that "phở" is derived from "pot au feu" a French soup. Vietnamese cooks blended the Chinese, French and native influences to make a dish that is uniquely Vietnamese."

I also learned from them that the soup is served in 4 bowl sizes. The larger is Xe Lua nicknamed 'The Train Bowl' which must explain why many Pho restaurants (Chicago, Toronto, Philadelphia and other cities) go by the name of Pho Xe Lua.

They also offer a directory of Pho Restaurants (US only) by State.

You can update it by submitting an entry.