Nicolas Lander shares recipes for a Risk-free business lunch or dinner in his Financial Times column today.
He invited a London based hedge fund manager to share her do's and don't on Lunch or Dinner with clients or partners.
Her first rule is keep it close to the office so you do not waste precious time traveling back and forth.
Make sure the dining room is spacious enough and with a low level of noise so you go about your business.
Choose a place that can deliver the food in a timely fashion.
Do not select pricey eateries with menus that are too complicated or exotic. Settle for the ones that can make everyone feel comfortable so the focus can stay on the business at hand.
For Lunch if time is limited and a matter needs to be sorted out, a good sandwich will do.

Read the article for more details.

I would add two things to it.
Keep the wine and liquor consumption under control. I witnessed a few alcohol induced meltdowns and if this is someone on your team it makes you look like a fool.
Second, choose a place that maintains its chairs and banquettes clean and in good condition.
Who wants to leave a restaurant with stained or dirty clothes or worse a torn outfit.

Have a good week-end!

Other restaurant stories: Can restaurants afford a poor or bankrupt staff and A restaurant backstage in 40 shots

Posted on March 31, 2007 in Consumer Products, Food and Drink, Personal Organizer, Serge the Concierge, To Do Lists, Travel | Permalink | Comments (0)

Visting one of my local wine stores Amanti Vino a couple of days ago, I had the chance and pleasure to taste 'Rouge et Noir' a California Brie cheese with possible literary ambitions or at least connections.
I was alluding to the closeness of its name with 'Le rouge et le noir' (The red and the black) a classic book by 19th century French writer Stendhal.

This Petaluma made Brie comes to us courtesy of the Marin French Cheese Company and uses Pasteurized Whole Milk and when ripe exhibits strong flavors or if I was more blunt I would call it pungent.

Posted on March 30, 2007 in Consumer Products, Food and Drink, Serge the Concierge, To Do Lists, Travel, Weblogs | Permalink | Comments (0)

I never had the chance to be in Washington DC for the Cherry Blossom Festival. Many of my friends there suggested I made time for this event.
It has not happened yet.
The Washington DC Cherry Blossom Festival starts tomorrow and runs until April 15.
The Washington Post offers an Excellent Guide to the 2007 Edition.
The main thing tomorrow will be The Smithsonian 'Tako Age Taikai' Kite Festival and my personal pick this week-end would be Poetry in the Japanese Garden on Sunday, if you want to learn how to write a Haiku and other poems and then create your own.
The Smithsonian also offers Japan Wow, a concert exploring Japanese music and tradition on Saturday Evening.

Philadelphia has its own Sakura Matsuri (the Japanese name for Cherry Blosson Festivals) from April 9 to the 22nd called the Subaru Festival (for its sponsor).

The Brooklyn Botanic Garden has its own Sakura on the week-end of April 28 and 29.

To get back to Washington DC there is also a Sakura Matsuri Street Festival (46th year) with Food, Sake, Anime, Origami and more on Saturday April 24.

I hope all this gives you ideas of things to do during the upcoming week-ends.

Related stories on Japan and Gardens: Surprise...Japanese Restaurant Week in New York plus Japan Wraps its Snacks in Anime and A Vertical Garden

Posted on March 30, 2007 in Personal Organizer, Serge the Concierge, To Do Lists, Travel, Weblogs | Permalink | Comments (0)

Why does it take so much work to do less? Is Less More?

As I paid a visit to Bike Hugger this morning, I noticed  DL Byron thoughts on 25 things to never get done (so you can spend more time riding your bike).

He mentions To-Don't which describes itself as "a place to share your mistakes, blunders, observations, goofs, mishaps, errors, habits, and fopauxs." I guess the last word was meant to be faux pas ,maybe the mistake was intentional.

Funny to realize we seem to need as many tools to do less than to do more or better if you prefer.

Should it rather be about doing more things that we like doing and do well?

Does it start with regaining some space, some room to make decisions? Less money, more time, vacations, it all comes down to making choices.

Jason Fried of 37 Signals wrote about Less as a competitive advantage (October 2005).

Barry Schwartz ('The Paradox of Choice') shared his thoughts on why 'Less is More' with IT Conversations in 2004 .

Perfect soundtrack for this could be

Deadly Weapons by Minimal Compact (not the Box Set).

Along the same lines: Humor me! From Canada the Work Less Party and Live anywhere, Escape the Daily Grind

Intrigued by a visitor's link or rather its name, The Gyrobike I decided to take a look.
What I discovered was an invention by four engineering students from Dartmouth College named you guessed it...the Gyrobike...Here is how its creators, three girls and one guy describe it: 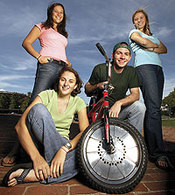 They won a one of the Popular Mechanics Breakthrough Awards for 2006.

It does not seem that their invention is commercialized yet.

I am sure a lot of parents cannot wait to hear the riders in training tell them to get their hands off their bike when it becomes available.

It will be a relief for our backs too!

Kudos to the Gyrobike and the creative minds behind it.

Other 2 wheel stories: Put your 2 wheels on display: Velospace and Ladies, straight to video: Novara Flirt plus Handmade bikes made in Copenhagen

While looking for more info on Dita, a French Lychee Liquor that claims to be one of the top sellers in Japan, I stumbled upon Eat Drink Hong Kong.
I did not learn more on Dita but in their 'News this Week' column I could not help but notice their mention of One Bar. Who would think of oysters shooters, wasabi-vodka jelly and red onion ice cream.
For this second offering, I could not tell for sure if it was one flavor or 2 or 3 of them but I would guess one it is.
The same place also features strawberries with horseradish and black pepper ice-cream, Bloody Mary anyone?

I tried to locate the One Bar for more accurate information but all I could find was the One-Fifth Bar on The World's Best Bars a site for thirsty travelers with a good expense account.
Their Bar of the Month is the Dakota Bar in Dublin (Ireland).

From 'Wag the Dog' to 'Wag Hotels': Boutique Hotels for Cats and Dogs

Traveling for business or pleasure or having a busy schedule that prevents you to tend to your pet's needs can create challenges.
Dropping your dog especially at a kennel can be a bittersweet experience.
With all this in mind, here comes Wag Hotels whose clientèle is exclusively Cats and Dogs.
Their first location was in Sacramento and Wag Hotels is opening a second in San Francisco in April and a third facility, I guess for our tech friends, in Sunnyvale in the Fall.
So for now it seems the concept is limited to California.
As for the rooms they go from simple to luxury suites equipped with plasma TV, sofas and other dog and cat favorites.
They also offer 'daycare' options.

So life is not a dog after all, especially for our best friends.

Recent 'Dog Story': Your trip won't go to the dogs with the 'Pet Watch Club'
and Dog Massage and Acupressure offered at Google for National Dog Day

The three 'S' words are how they define themselves. This restaurant  Acorn House does not recycle ideas created by others but rather combines an emphasis on fresh and seasonal products with a dedication to reduce waste in all its activities to a minimum.

Located at 69, Swinton Street in the King's Cross area of London, Acorn House serves its community more than food. It also offers 10 local young adults a chance to train for a year with them.

Calling it All Taste and No Waste, The Observer Food Monthly gave them its Best Newcomer Award for 2007 this past Sunday.

Giles Coren of Times Online called it "The most important restaurant to open in London in the past 200 years". Read his December 2006 Review for the rest of his rave.

Share your impressions if you have been there. I plan on asking them to give me a tour when I visit Europe later this year.

One suggestion I have for them is to make the fonts on their website slightly bigger. It would be more 'reader friendly'.

Also worth mentioning in the good and tasty realm: Bordeaux Quay, a green restaurant (Bristol)

Google staff at their Kirkland location did celebrate with a Bring your Dog to Work Day.
Their four legged friends were treated to dog massage, acupressure, grooming and organic treats no less...

Did your company give your pet the royal treatment?

My dog was pampered with a visit to the groomer but on Saturday (the 24th).

Other Dog Stories: Is your Dog a DOGA practitioner

The good people at the Eat Local Challenge always come up with...challenging ideas.
They ask those of us disciplined and interested enough to take the Penny Wise-Eat Local Challenge from April 23rd to April 29.
I might take issue with the numbers they quote as the average American family food budget.
With at least 4 mouths to feed in our family, $144.00 might be what I spend on the main shopping that takes place on the week-end. The numbers they use are almost 2 years old so that must be part of the discrepancy.
If you want to participate, check the Penny Wise Nuts and Bolts outline.

Amongst the things in season in April according to the BBC Food Section count: Rosemary, Spinach, Strawberries, Spring Lamb and Cockles...

If you moved to a new house and feel like showing your green stripes  you might also want to check their How to be a gardener in the Spring guide.

Also on the Beeb, Food and Eating Local: Food memories, a Taste of my Life and Grow your Own,the Eat Local Challenge plus Mikan Orange season in Tokyo