If there is one thing we could do without while traveling, it is chargers. Help is on the way with Moixa Energy brilliantly simple idea: USB Rechargeable Cell Batteries. 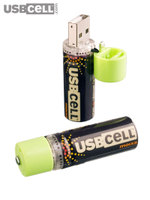 They are currently available (size AA) in the UK but should quickly find distributors elsewhere.

As you can see in the picture, pop up the battery top and plug it into any USB port to recharge.

No need to stock a ton of alkaline batteries or carry around your chargers.

Use them to power your remotes, digital camera, mp3 player and more.

Kudos to Moixa for this product.

I know I will buy some of these for my kids' handheld video game and mp3 players.

Getting Things Done without Sweat: Simplicity

We all have been there wondering and even expressing frustration at why tasks at work or at home were not taken care of.

I have Simpler Work on my mind as my friend Bill Jensen would say.
Instead of giving assignments why not let people take ownership of specific tasks and projects and have them set their schedule. Everyone then knows who is responsible for something and when they will complete the project.

Check the Simplicity Project at MIT. Read The Beauty of Simplicity by Linda Tischler (Fast Company)

Posted on September 30, 2006 in Health, Personal Organizer, Serge the Concierge, To Do Lists | Permalink | Comments (0)

I just read Hola Bank! Me llamo Steve by fellow Montclair resident Steve Baker on Business Week Blogspotting. He attended a conference where Larry Rosenberg of Fair Isaac raised the point of how banks are really going to customize their offerings if they cannot even remember what language (English or Spanish) we use at the ATM.

My opinion is that for most banks we have become a Data Stream, not a Person, not an Individual Customer. At most financial institutions, if you request a loan it is computer driven. A growing source of revenue for banks and other financial services is Fees. I remember not so long ago when you could apply for a loan and talk with a person who had a say in the final decision. Has the customer been removed from customer service in banking? It is a retail business after all. This is why most of the time I use the ATM because it does not feel like it makes any difference if I deal with a Bank rep, except for the wait.

In my New Jersey Concierges business, I consider each client as someone with specific needs and offer a pernalized service that matches them.

Posted on September 30, 2006 in Consumer Products, Serge the Concierge, To Do Lists, Weblogs | Permalink | Comments (0)

Tomorrow, Saturday September 30, The Smithsonian and many other museums around the US want you to pay them a visit.
That's why they staged Museum Day which offers Free General Admission to selected Venues.

To find out more about the Event, read What is Museum Day, find out about Participating Venues in your State and Download the Card so you can get your dose of Free Culture this week-end.

If you are also looking for ideas and inspiration check Well Read : Recommended Books from the Smithsonian Magazine.

Must love Dogs and Kids and easy to clean Messes, FiberFloor

When you have a dog roaming around the house and kids lost in an 'art' project on the floor, accidents can happen. Well, here is a solution courtesy of Tarkett. Called Fiberfloor it is comfortable, stains can be wiped off, the surface can be vaccumed or swept.
Best of all it offers many awesome designs including some kidsplay glow in the dark options. 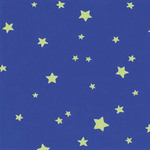 The material is hypoallergenic.

I discovered this smart solution thanks to Behind the Curtains.

It sounds perfect for a basement room.

Posted on September 29, 2006 in Consumer Products, Personal Organizer, Serge the Concierge, To Do Lists | Permalink | Comments (0)

Based on the simple criteria that 90% of the entrees on the Menu cost $10.00 or less, the food writers of the San Francisco Chronicle offered this month the 10th Edition of their Bargain Bites.
You can search Restaurants by Location, Category or Cuisine.
The Cuisine section offers the most diverse choice.
Beyond the obvious Chinese, French, Carribean and Mexican less traveled options are Burmese and Lao.
I checked the lonely Moroccan option Tajine (no alcolhol, cash only)a small (7 tables) place.

The Kebabs cost only around $7.00. As for my favorite Couscous, you can fill up for $8.00 to $10.00.
Check their Menu which includes Vegetarian Dishes and Sandwiches and my substitute for a Hot Dog, Merguez.

So if you want a tasty, unexpensive lunch while exploring the San Francisco area, you now have a few options.

Posted on September 29, 2006 in Consumer Products, Food and Drink, Personal Organizer, Serge the Concierge, To Do Lists, Travel | Permalink | Comments (1)

'The End of Suffering', a Mission Statement

How many Mission Statements have you read, written, heard that sound like a good sound bite and not much more?

Our friend Tim Sanders of Love is the Killer App fame offers us a straightforward one : The End of Suffering which starts as "I believe that our mission in life is simple: Participate in the end of suffering. If we reduce suffering in the world, we enable the positive".

Read A Mission Statement that rocks: The End of Suffering by Tim Sanders and get your groove back.

Success (the Magazine)...Real People Successful in Business and In Life

Who are all these people starting magazines these days? Last night at the cocktail party for the Launch of Mavericks at Work, I met Gay Bryant the Editor in Chief of Success Magazine. I liked the way she described it as Success for Real People in Business and In Life. 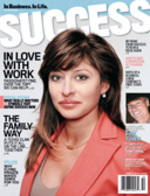 Maria Bartiromo graces the cover of the current issue. The articles focus on the Human Factor not the Glitz. You can also submit your own succes story.
Yesterday's book party featured some very successful people such as Elliot Spitzer which actually sounded like a genuine guy during the few minutes we talked.
The nicest person I met was actually Rob McEwen a Gold Mining Executive (US Gold) and believer in the Open Source way.
What was most refreshing about him was the fact that he illustrated his philosophy of success by talking about his personal interests and not work, a well rounded person.

Posted on September 28, 2006 in Consumer Products, Serge the Concierge, To Do Lists, Web/Tech | Permalink | Comments (0)

No Hats, Head for the BOBS and Vote for 'Serge the Concierge'

Since you read this, you must have an International Feel (as Todd Rundgren would say). For the second year in a row we entered 'Serge the Concierge' in THE BOBS. What? No hats here, The BOBS stands for best of the blogs. People entering this contest span the globe and use a variety of languages (Arabic, Chinese, Dutch, English, French, German, Persian, Portuguese, Russian, Spanish). We are in the English, General topics section.

So if you want to see how fluent you are in other languages or just want to discover new voices, head for The BOBS.

You can also Vote for 'Serge the Concierge' if you wish.

The BOBS awards are organized by Deutsche Welle.

I discovered it last year thanks to Loic Le Meur.

Posted on September 28, 2006 in Consumer Products, Serge the Concierge, To Do Lists, Travel, Weblogs | Permalink | Comments (0)

I was lucky enough to receive an advance copy of 'Mavericks at Work' by William Taylor and Polly LaBarre a while back.

No business as usual here, rather than dwell on failing models, the pair showcase companies as varied as Potbelly Sandwich Works, boardgame maker Cranium and science leaning NineSigma who matches companies with innovators worlwide to name a few. 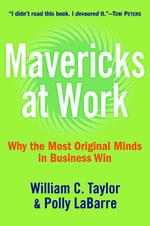 'Mavericks at Work' highlights how the 'open source' model of sharing ideas and information is critical. Standing for something, having a clear identity as a company and in your products is another thing.
In his Financial Times review (registration required), Stefan Stern  reminded us that 'Stars do not
work for Idiots'.

My only regret about the book is the fact that it does not feature companies outside the US.

I hope to meet some of the people showcased in 'Mavericks at Work' and discuss their ideas tonight in New York City when I attend the book launch party.